Becoming One with the Machine 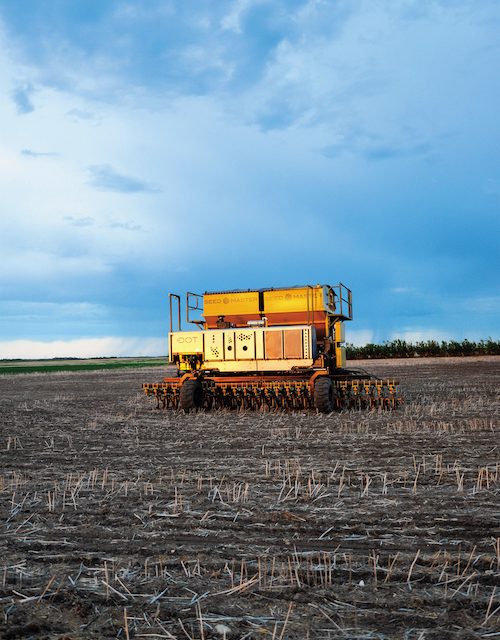 The DOT Power Platform is designed to handle a large variety of implements commonly used in agriculture.

This new seeding innovation is one example of how new ideas are transforming precision ag.

Agriculture – like all other sectors – is changing fast, with new technologies and computing power now being employed to achieve things our grandparents wouldn’t believe. One example of these achievements is precision agriculture, and Saskatchewan-based SeedMaster has taken precision ag a step further on its evolutionary path by developing the DOT Power Platform.

The DOT Power Platform is designed to handle a large variety of implements commonly used in agriculture, mining and construction. Its U-shaped frame directly loads implements so that they ‘become one’ with the machine. It can be run by remote control or in completely autonomous mode.

DOT is the brainchild of SeedMaster founder Norbert Beaujot, and it’s one of a long line of innovations Beaujot has dreamed up and brought to reality over his long career. Both his background in farming and his education as an agricultural engineer at the University of Saskatchewan prepared him for this calling.

“As a company, we’re always striving for more efficiencies and profitability at the farm level, and on that continuous quest, we’ve developed quite a few pieces of equipment,” Beaujot explains. “We’ve grown in precision ag, in metering and everything else seeding related. We were the first to build an 80-foot and then a 100-foot seeder, both with high capabilities in metering and other areas of operation.”

Indeed, it was thinking about larger equipment that led Beaujot to come up with DOT.

“I was thinking, how do we regain efficiencies that we lost in going bigger?” he recalls. “It was an evolution of thoughts about this in the beginning. Of course, we’re always hearing about autonomous cars and autonomous buses in the media, which also got me thinking about autonomous agriculture. From having the idea, it was a series of sketches and brainstorming various designs, looking at how one unit can power all the different implements.”

For most of the next two years, Beaujot worked out all the details, everything from how to mount the steering and wheels to where the engine should sit.

“I didn’t want a traditional tractor design of course. The U-shape means DOT can drive ‘into’ any implement made to receive it, and you just have to attach hydraulic hoses and electrical, but someday that might be automatic as well.”

After the U-shape came to him as the best design, the other components had to be fitted, but he’s always really looking for a simple way of doing things, he explains. “I filed the patents pretty early on and to file, you have to work out a lot of details and provide sketches.”

Beaujot decided to place the engine and some other things on one of the side rails, making it possible for tanks and other things to be placed on the other side, and for seeding and tillage equipment to go below the rails. Then he had to scale the unit correctly for efficient operation on large farms.

In terms of autonomous operation on-farm, the first step is to load boundary and field obstacle information into the system. A few seconds later, the DOT software creates a path plan, which is then approved by the farmer and can be altered at any time to address changing field conditions. During actual operation, DOT’s short- and long-range sensors allow it to sense any issues in its path, and if it’s unsure how to proceed, it will send an alert to its farmer-owner.

A prototype DOT unit is busy powering a seeder, sprayer, land roller and grain cart on research fields. In 2018, there will be a limited release of DOT to select farms in Saskatchewan, followed by broader distribution nationally and beyond in due course. Since its launch at the Ag in Motion show in Saskatchewan in July of 2017, it’s not surprising that DOT has received a groundswell of interest inside and outside of agriculture from around the world.

Norbert’s son and DOT marketing and sales manager Cory Beaujot believes the seed-growing industry would benefit from the DOT model of autonomous agriculture in several ways.

“Pre-plotted-out maps of seeded areas dedicated to this variety or that and safe and easy transition between different varieties, are a couple of things that come to me right away,” he says.

Norbert adds: “The way DOT keeps track of everything — the day, weather, plot size, GPS coordinates and so on — it makes it easy for farmers to keep historical records and for researchers to replicate trials. Whether it’s a seed grower or non-seed-growing farmer, they don’t want to lose anything, don’t want to damage seed or waste anything, and DOT also assists with that.”

Cory notes that food security is of ultimate concern to a huge percentage of the world’s population today and that it’s only going to become more important as we march forward.

“Various aspects of food security are beyond our control — climate, weather patterns, to a lesser degree global politics and so on,” he says. “That said, things like crop genetics, efficiency-enhanced shifts in the food production and distribution systems are under our control. This is where SeedMaster and DOT step in. If we don’t think out of the box, we’re more likely to replicate the inefficiencies of the past. Out-of-the-box thinking shakes things up, ruffles feathers, creates dialogues and leads to innovation and positive change.”

The absence of a good labour source for farms, Norbert adds, is another reason agriculture is going to continue to need innovative thinking.

Canadian futurist Richard Worzel agrees. He believes precision ag systems will become more prevalent because there will be fewer people willing or able to become farmers, and Canada will need more systems that both cut down on labour and increase productivity. He notes that “software programs that can watch for you and alert you, can come up with quantitative analysis based on in-depth analysis of massive amounts of data. DOT combines some of that and these systems will only get more common.”

While he notes systems like DOT are innovative, they’re not a true form of artificial intelligence. Worzel foresee a possible future where farms may have a true AI that a sub-system like DOT reports to when it runs into a problem, instead of reporting to a human being.

As for how he achieves his out-of-the-box thinking, Norbert gives much of the credit to his ability to simply dwell on a problem.

“In the first two years, there were very few days I didn’t think about it, some days three hours and some days 11 hours,” he says. “A lot of people would get bored. I don’t consider myself smart beyond the average, but I have the ability to focus intensely on a mechanical problem and come up with solutions.”

He adds: “I’ve read that Einstein would think and think and not get very far and go fishing and it would be there. So sometimes taking a break really works well. But when the subconscious mind comes up with something that seems complex, I’ve found it’s really a bunch of simple thoughts that come together.”