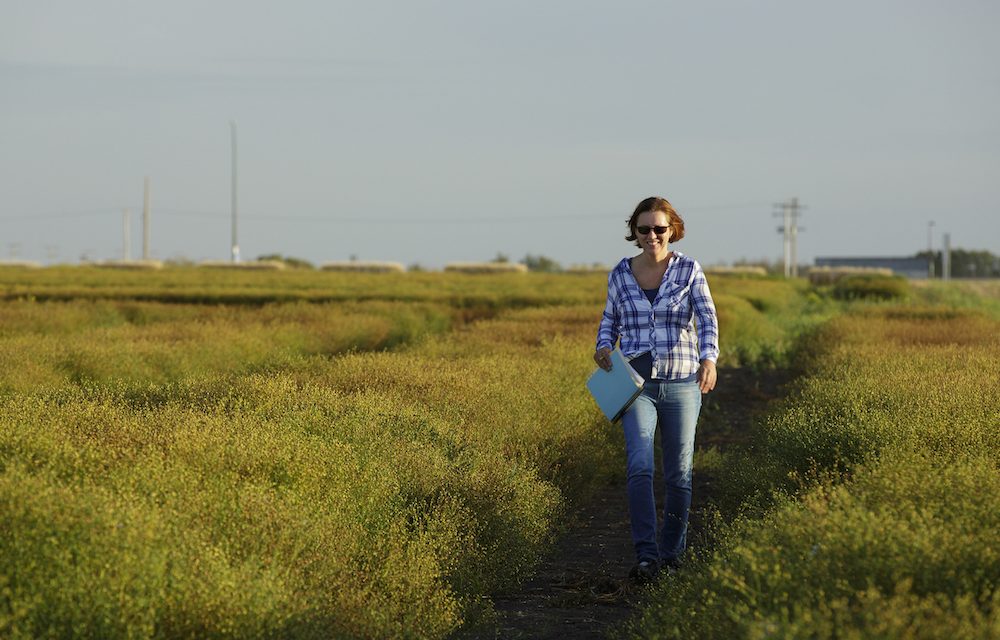 Helen Booker is a breeder with the only flax breeding program in Western Canada, located at the Crop Development Centre in Saskatoon.

With only one public breeding program left for the crop in Western Canada, flax researchers are trying to get growers to adopt the latest genetics and help usher in a renaissance for this valuable product.

You might forgive Helen Booker for feeling a little lonely these days. As a member of the only public flax breeding program left in Western Canada, she’s always anxious to chat about flax.

The handful of breeding programs for flax that once existed in Canada have been whittled down to two — a small one in Quebec, and the other at the CDC. Flax is a crop that, despite its increasing popularity in a variety of foods, is often considered a niche product, and overshadowed by the likes of wheat, canola, corn and soybeans.

Flax acreage in Canada declined to 925,000 acres in 2016 after experiencing steady increases in the previous four years and reaching 1.6 million acres in 2015. The decline in 2016 was primarily due to tremendous increases in pea and lentil acres in Saskatchewan and Alberta, notes Don Kerr, recently retired president of the Flax Council of Canada.

Canada is also the first country in the world to allow a health-related claim for flaxseed for use on food labels, linking ground whole flaxseed to lower cholesterol — a major risk factor for heart disease. This claim is one of only a dozen deemed to meet the rigorous scientific criteria established by Health Canada.

Those are major honours for any crop. So why is there less flax breeding happening in Canada?

“There’s more than a dozen cultivars registered for production in Canada, but flax growers are maybe growing a couple of them. Seed companies can’t make money selling certified seed — there’s just not enough revenue in it,” Booker says. “There’s no real comprehensive business plan for these smaller crops where farmers are able to save the seed and replant it, and they don’t have to go and buy seed every year.”

That leaves breeders like Booker with a problem. She needs to work hard to ensure Canada remains a world leader in flax, and doing that means improving the crop for the future and continuing the introduction of new lines. At the same time, older varieties of flax — CDC Bethune, first registered 19 years ago and the most popular one in Canada — continue to hang on and dominate the marketplace.

Booker and the CDC put forward a single flax line earlier this year at the meeting of the Prairie Grain Development Committee (PGDC), and it was recommended for registration. FP2513 shows an impressive yield bump — 117 per cent of CDC Bethune in the Zone 1 longer-growing season black and grey soils of Western Canada, where the majority of flax acres are located. That’s significant, but Booker isn’t holding her breath that the new line will become king of the flax world anytime soon.

“We’re trying to move farmers away from Bethune and adopt some of the newer genetics, but it’s not easy,” she says.

Part of the issue, she acknowledges, is that flax just hasn’t made the same yield gains as other crops over time, so it can be hard to get growers excited about a new variety when they have seed from the old standbys like Bethune and CDC Sorrel on hand and ready to put in the ground. Farmers love the agronomics of those varieties, she notes.

According to Kofi Agblor, managing director of the CDC, part of the solution is to make the flax program more efficient and by creating new flax varieties that will be better positioned to be adopted by growers. The CDC recently commissioned a study of its flax program, which came up with a number of recommendations for how to make the program better.

“It’s what works on the farm that we’re now focusing on,” he says.

Flax faces many of the same challenges as barley when it comes to sluggish adoption of new varieties, Agblor points out, so it’s not alone among crops that have a hard time against newer genetics adopted in the marketplace.

“If you look at 2016, CDC Copeland was the No. 1 variety of malt barley. That variety is almost 20 years old. The return on investment for barley is lower than for wheat, and because the adoption isn’t there, you can spend a lot of money to bring newer varieties to the marketplace and not have the uptake to really make it worthwhile.”

The solution? Avoid the temptation to put forward a new line of flax unless it shows a significant gain in yield or possesses an economically important trait.

“Otherwise, what you end up doing is just littering the market with varieties no one is picking up,” Agblor says.

“What needs to happen is we need to create new varieties that do two things: fulfill the needs of farmers in terms of yield, disease resistance and such, and fulfill the needs of the end users, like improvements in oil quantity and the like. This way you select only lines that will make the cut, and that results in a much more efficient use of resources.”

That was the thinking last year, when the CDC put forward only one line at the PGDC meetings, and it’s that kind of thinking that will help flax succeed in the marketplace, notes Kerr.

“Growers are choosing what gives them the best bang for their buck. Yield has always been an issue with flaxseed, but growers were seeing 27 bushels per acre last year with flax, which is pretty good,” he says. “I think the work we’re doing as a sector has contributed to that, and it’s not just genetics — part of that is getting information about best management practices out there.”

Muffins, India and the Future of Flax

According to Kerr, despite the drop-off in Canadian flax acres, the crop is well positioned to experience a renaissance all its own.

“We’ll see a rebound in acres next year. In terms of markets, we have a good story to tell about flaxseed,” he says.

The Health Canada claim, he says, has gone a long way to boosting the crop’s profile. The Winnipeg Regional Health Authority has added flax muffins to the menu in many of its personal care homes and hospital sites. In 2016, an estimated 50,000 muffins were served in the health region. The muffin’s appearance on the menu began in September of last year, after consultation with the Flax Council.

Three other foods made with ground flaxseed were created and tested at the Food Development Centre in Portage la Prairie — a bread, smoothie mix and nutrition bar.

The Flax Council also embarked on a trip to China in April 2017. Chinese demand has been growing steadily over the past number of years, says Kerr, and he wants to ensure Canadian flax is in front of them.

“We could see our exports bounce back. Europe is a major market, and we might see some increases there this year. There’s also growing demand in India. They grow some flax there, but not in any great quantity. Our pulse industry is benefiting from shipments to India, and I think flax will as well. We’re also looking at Mexico and markets like that, where we can see some positive growth.”

For Agblor, there is indeed a good story to tell about flax. A recent economic assessment the CDC conducted of its plant breeding program showed a $6 return to the farmer for every $1 the CDC invests in flax development.

“That’s impressive. It sounds low, but that’s because there’s such few acres. What we need is to convince people to grow more flax, and to do that we need a method of capturing the value of the varieties in the marketplace,” he says.

“If you buy certified seed once and you re-use the seed for the next six years, where does the money come from to develop a new variety that has better yield? That’s a discussion we have to have industry-wide. A lot of our breeders have to run around to get money to get that work done. They spend a lot of time filling out applications and looking for funding.”

The advent of new products, like the new flax being developed by the California-based Cibus expected to be released in 2019, could also raise the profile of the crop. Cibus’ new non-transgenic, glyphosate-tolerant flax product will offer improved yields for flax farmers and promises healthier flax-based oils for consumers, according to the company.

It also provides a gateway-enabling development platform that can be used for additional non-transgenic trait development in flax, notes Jim Radtke, the company’s senior vice-president of product development. He spoke about the product at the PGDC meeting in Winnipeg in February 2017. It uses Cibus’ non-transgenic Rapid Trait Development System (RTDS) to make gene edits to plants, a technology it’s also using in canola, rice and potato.

The Canadian flax market is in need of an effective weed control package for flax, and that’s why the Flax Council of Canada with the support of the federal government has partially funded the development of this crop. According to Agblor, germplasm from the CDC was used to help develop it.

“It was really exciting to see glyphosate tolerant flax in a greenhouse. Flax doesn’t like glyphosate at all, so we’ve clearly made significant progress,” Radtke says.