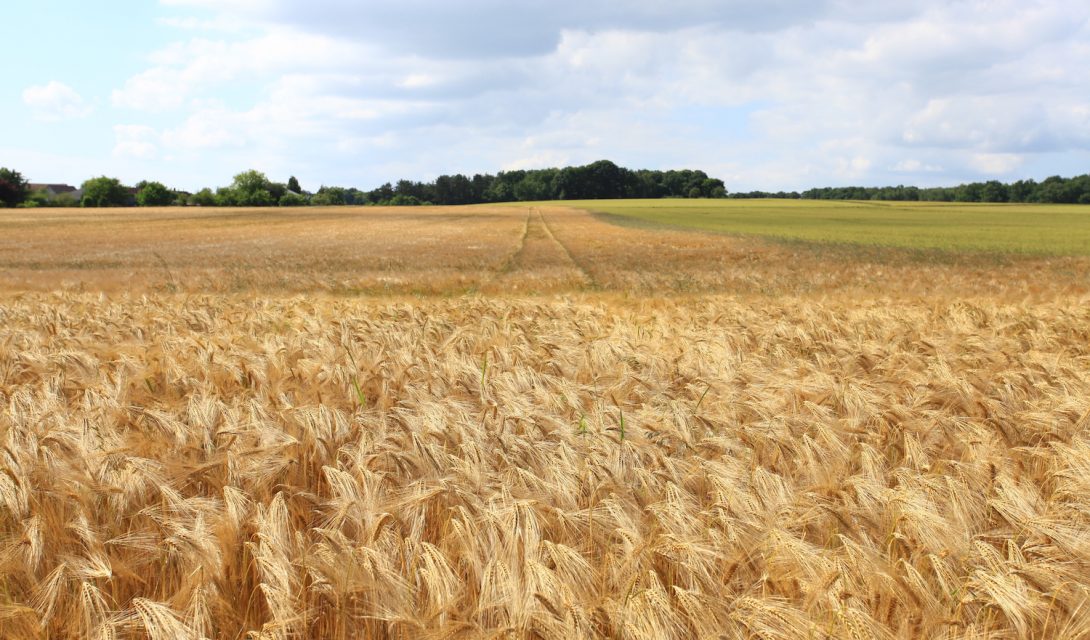 Farm operators are slightly older and there are fewer farms in Canada than in 2011, but farms are on average larger and more area is devoted to crop production according to the results from the 2016 Census of Agriculture.

Agricultural data has been collected in Canada since 1666 and 2016 marks the 22nd Census of Agriculture since Confederation. The census paints a sweeping picture of the agricultural sector. It tracks changes in crops and livestock, as well as the evolution of farming practices and mechanization, from the power of horses to horsepower. Canadian farmers have continually taken advantage of technological advances to more efficiently deliver a wider variety of agricultural products to Canadians and the world. While total farm area edged down from 2011, the area dedicated to cropland rose to 93.4 million acres in 2016. Although urbanization may reduce cropland available in some areas, a net increase in cropland is attributable to a shift in land use. Farmers have converted land formerly used as pasture, summerfallow or other less productive land into productive area. Canola remains the biggest crop, accounting for more than one-fifth of all cropland.

The number of farm operators declined from 2011 while the average age continued to rise. However, the proportion of operators under 35 years of age edged up for the first time since 1991. Despite the increase in the average age, only 1 in 12 operations reported having a formal succession plan laying out how the operation will be transferred to the next generation of farmers.

Agricultural operations in Canada employed 280,315 people in 2015. From a trade perspective, agricultural goods accounted for 2.2% of Canada’s total imports and 4.6% of total exports. In terms of value, almost one-third of Canadian agricultural production was exported in 2013. 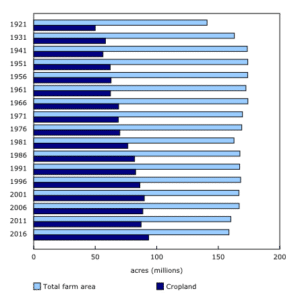 There are fewer farms, but the farms are larger

The results of the 2016 Census of Agriculture show that the agriculture industry continues to consolidate. There were 193,492 farms counted in 2016, down 5.9% from the previous census in 2011. However, this was the lowest rate of decline in 20 years.

The area dedicated to cropland rose 6.9% from 2011 to 93.4 million acres (chart at right) in 2016, as land that was flooded during the 2011 Census was brought back into production, use of summerfallow decreased and marginal land was converted into productive cropland.

Younger operators and women make up a larger share of farmers

However, the fastest growing age group was farm operators aged 55 years and older. The average age of operators – individuals who make management decisions for the agricultural enterprise – edged up from 54 years in 2011 to 55 years in 2016. This trend parallels the ageing of the general population. Among Canadians aged 15 to 64, the share of people aged 55 to 64 years old (all baby boomers) reached a record high 21.0% in 2016.

The 2016 Census of Agriculture found that 44.4% of all farm operators did some off-farm work, usually as a means of supplementing their total income. Just over 3 in 10 (30.2%) operators worked an average of 30 hours a week or more off the farm.

British Columbia had the highest incidence of off-farm work, as well as the highest proportion of farms with total sales under $10,000. Just over half (51.1%) of farm operators in British Columbia reported receiving a wage or salary from another job or operating a business unrelated to the farm.

The transfer of agricultural assets as farmers transition out of the sector can happen in a number of ways. Farm assets can be sold in whole or in part and the buyer can be a new entrant or someone looking to expand their existing operation. Farm operations can also be transferred to other parties via a will or written succession plan. Beef-type farms remain the second most common farm type, accounting for 18.6% of agricultural operations, up slightly from 18.2% in 2011.

Total farm area decreased 0.9% from 160.2 million acres in 2011 to 158.7 million acres in 2016. Shifts in tenure were responsible for some of this decline, as rental agreements tend to cover only productive land. The area of cropland increased as farmers cleared, drained and upgraded marginal lands to support crop production, shifted practices to reduce the need for summerfallow, and returned land which had been flooded in 2011 back into production. While cropland grew, woodlands and wetlands as well as pasture decreased.

Farm size varied considerably based on region and farm type. The largest operations on average were found in Saskatchewan (1,784 acres), while the smallest on average were located in Newfoundland and Labrador (174 acres).

The area of hay and alfalfa cropland declined 16.6% (-2.8 million acres), while the area of pasture decreased 4.4% (-2.2 million acres), due in part to a smaller beef herd. Some of the hay and pasture land was converted to field crop production.

Farm operators continued to diversify the crops they produce in response to changing market demands and improved crop varieties. For example, lentils are now the third-largest crop in Saskatchewan following canola and spring wheat, as market demand increased from foreign buyers. According to the Food and Agriculture Organization of the United Nations, Canada was the largest producer of lentils in the world in 2014.

Meanwhile, there has been an expansion of soybeans, corn for grain and corn for silage in the Prairie provinces, the result of new varieties suitable to the growing conditions of the region. Soybean area in Manitoba more than doubled – from 705,032 acres in 2011 to 1,645,397 acres in 2016. In Central Canada, corn and soybeans remained the largest field crops by area, while fodder crops and potatoes were the largest crop areas in Atlantic Canada.

The beef sector experienced strong international demand for Canadian beef breeding stock from 2011 to 2016, mainly from the United States. Demand was largely driven by the smaller size of the U.S. beef herd from 2010 to 2012 as a result of drought conditions. Increased demand, coupled with limited supply, drove prices to a record high in 2015. Some producers chose to take advantage of higher prices to sell their cattle and focus on other agricultural activities, such as crop production, or opted to leave farming entirely.

The beef sector is generally divided in two, with cow-calf operations specializing in raising breeding stock and feedlots specializing in feeding cattle destined for market. The Prairie provinces accounted for just over 80% of the total beef cattle in Canada. While the average number of head per farm increased, it was not enough to offset an overall decline in producer numbers. The size of the beef breeding herd (beef cows and beef heifers for breeding herd replacement) fell 1.0%, from 4.5 million animals in 2011 to 4.4 million in 2016. While the 2016 Census marks the second consecutive decrease in the beef breeding herd, the rate of decline slowed from the 22.3% drop reported in the 2011 Census.

Pig numbers rose from 12.7 million in 2011 to 14.1 million in 2016, while the number of farms reporting pigs increased from 7,371 to 8,402. The growth was due to better market conditions, which boosted the price of pigs relative to the period before the last census. Prior to the 2011 Census of Agriculture, the pig sector was beset by high feed costs, disease and low pig prices, resulting in many farmers leaving the sector and lower pig numbers.

Fruits, berries, and nuts acreage rose 6.7% from 2011, mainly due to blueberries and cranberries. Blueberry area continued to expand in Quebec and Atlantic Canada (principally areas of managed lowbush blueberries) and in British Columbia (where highbush blueberries dominate). Nationally, blueberry area has consistently increased over the past several censuses and now stands at 196,026 acres. 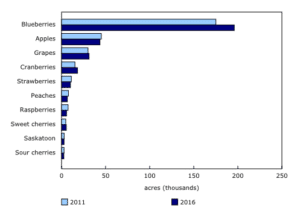 Cranberry area increased from 15,191 acres in 2011 to 18,134 acres in 2016. Exports of fresh cranberries also increased, rising 77.6% from 2011 to 63.5 million kilograms in 2016. Both blueberries and cranberries are amenable to mechanized harvesting, allowing operators to increase the scale of their operation with a minimal increase in the number of employees.

In contrast to blueberries and cranberries, the area of strawberries and raspberries declined as the commodities faced disease outbreaks as well as labour and market challenges. Raspberry area fell 23.7% from 2011 to 5,651 acres in 2016, while strawberry area decreased 8.4% to 10,155 acres.

Apple orchard area continued to decline, with the largest decreases in Nova Scotia and Quebec. Overall, the total acres dedicated to apple production fell 3.2% from 2011 to 43,631 acres in 2016. While area of production declined, the area is used more intensively. For example, the yield of apples in Canada increased from 7.2 tons per acre in 1996 to 10.0 tons per acre in 2016. Nursery operations reported 17.8% less area in 2016 (49,073 acres) from five years earlier, while Christmas tree area declined 16.0% to 58,780 acres and sod area fell 10.6% to 56,719 acres. Lower sod and nursery area were driven by a shift away from the construction of single-detached dwellings in favour of multi-dwelling type buildings, and a move away from traditional landscaping practices towards hardscaping. The decline in Christmas tree area was a result of increased demand for artificial Christmas trees.

One in eight farms sold food directly to consumers

Farmers harvest the sun for more than growing crops

The total value of farm machinery and equipment owned and leased by agricultural operations increased 15.4% (in 2016 constant dollars) to $53.9 billion.

Gross farm receipts totalled $69.4 billion in 2015, while operating expenses reached $57.5 billion. On average, for every dollar in gross farm receipts, farms incurred 83 cents in expenses in 2015 for an expense-to-receipt ratio of 0.83. Rounded to the nearest cent, the ratio was unchanged from 2010. The stability in the expense-to-receipt ratio indicates that farms were as profitable in 2015 at the national level as they were in 2010.