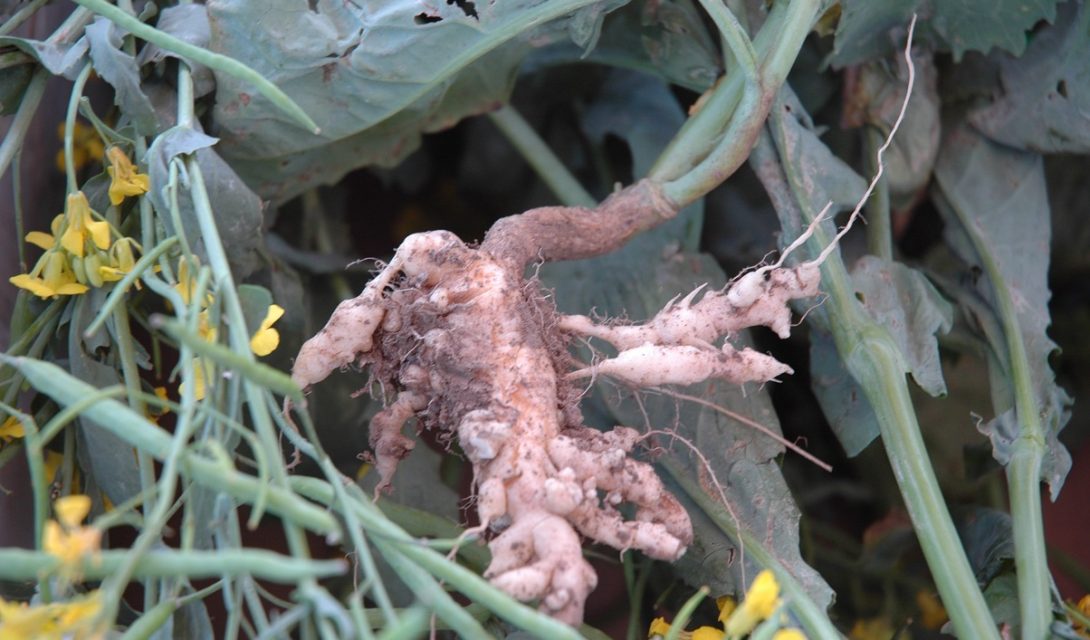 On the Prairies, clubroot appeared in Alberta in 2003, in Saskatchewan in 2008 and Manitoba in 2013. As any grower can tell you, it’s a nasty canola disease that usually worsens in a field every year, partly because the spores are very easy to spread and so hardy they can survive for up to two decades in the soil. Combine this fact with the strong prices that canola fetches these days – widely encouraging back-to-back or two-year rotations – and you have a big problem.

Companies are certainly moving as quickly as possible to produce seed with effective resistance to clubroot, but breeding to defend against this particular pathogen involves navigating a wide range of complex challenges.

Dr. Jed Christianson, pathology lead at Monsanto Canada, explains that clubroot’s large and quickly-adapting population sizes means that it takes relatively long canola rotations of three or four years to see significant drops in the number of viable spores in the soil, and very long rotations of over 10 years for spores to effectively disappear.

“Each gall produced on a canola root can contain billions of spores,” he says. “So, given the numbers of spores generated, even very rare events like the emergence of individual spores that have gained the ability to infect resistant canola will happen over a fairly short number of cropping cycles. A one in a billion event doesn’t seem that unlikely to happen when you’re given 20 billion chances.”

Combine this with the fact not all clubroot pathotypes (races) have been identified, and it’s therefore difficult, explains Weidler, to develop a canola variety that is resistant to all potential pathotypes to which a plant may be exposed.

Dr. Igor Falak reminds us that it was in 2013 that a new clubroot pathotype was identified, one to which all canola varieties on the market carrying resistance to the original 2003 pathotype were susceptible. Although hybrids with the initial type of resistance continue to hold their own on most infested acres, the number of fields with the new pathotype is increasing annually. Falak, senior research scientist with Corteva Agriscience, blames this situation on “years of canola-on-canola.”

In addition, he notes that although clubroot “is similar to another disease of canola (blackleg), where canola products may carry race specific resistance,” clubroot-resistant canola varieties “do not have ‘fallback’ resistance mechanisms, unlike blackleg-resistant products that also have a different type of stable resistance.”

More breeding challenges are found in the fact that because canola plants carry no clubroot resistance genes, all the major seed companies are actively testing resistance genes found in rutabaga, cabbage and turnip. However, Weidler notes that because these species are only remotely related to canola, it’s far from easy to transfer genes between them without also transferring additional unwanted genetic “baggage” that negatively impacts yield, canola quality or agronomics.

If all this wasn’t enough, clubroot is a challenging organism to deal with, having unique characteristics – described by Weidler as a form of life “somewhere between a bacterium and a fungus.”

Christianson concludes that the biggest challenge in creating clubroot-resistant canola seed is to introduce resistance “while continuing to improve hybrid performance for yield, maturity, standability, resistance to other diseases, harvestability, seed quality and all of the other attributes that are important to growers’ success.”

Christianson says the steps involved in breeding clubroot-resistant varieties are relatively simple, and that any breakthroughs relating to resistance genes “are really just the discovery and characterization of more of them through concerted screening efforts.”

The entire process is a matter of crossbreeding canola with resistant relatives through normal pollination procedures and recovering offspring that are clubroot-resistant. “Those offspring then have to be crossed with canola again and again through many generations, selecting the resistant offspring at each generation for use in the next cycle to obtain plants that maintain resistance, but have recovered the characteristics of high-performing canola,” Christianson explains.

Weidler adds that unwanted genetic material from the resistance donor that negatively impacts the agronomic performance of the offspring is removed through several crossings of the offspring with elite parent stock. “Using molecular breeding tools, we can check the progress towards the end goal,” he notes. “Ideally, only the genetic sequence conferring clubroot resistance has been transferred and no other parts of the donor genome remain in the offspring.”

DowDupont was the first company in Canada to market clubroot resistant hybrids in 2009 (45H29).

“Our hybrids have multi-source and multi-race resistance to clubroot, and have a high level of resistance to the most prevalent clubroot race – race 3 – along with resistance to races 2, 5, 6 and 8,” Falak notes. “We have five hybrids with clubroot resistance: 45H29, 45H33, 45CS40, 45CM36 and 45H37. Pioneer hybrid 45CM36 is one of our newest products that contains a new source of clubroot resistance that confers resistance to both the initial type and new pathotypes, and can be rotated with the original resistant hybrids.”

Hybrid 45CM36 was launched in 2017 and is widely available to western Canadian famers for the 2018 growing season.

For its part, Bayer CropScience has “identified several new potential resistance sources,” says Weidler, “and we have been able to demonstrate that these are different from what is currently on the market.”

Christianson says that as Monsanto nears “actual commercial entry into the marketplace, we will have more to share about how second-generation resistance fits in with existing resistance traits to provide a sound disease management strategy.”

No matter what resistant canola varieties are marketed, no company can predict how long a new variety will last before it’s compromised. This depends on too many factors, explains Weidler, including the resistance gene, environmental conditions and management practices.

All the companies strongly agree that the existence of varieties with resistance is only part of the clubroot solution.

Weidler emphasizes the importance of an integrated disease management approach for clubroot, and fully supports the recommendations of the Canola Council of Canada.

Falak and Christianson echo the sentiment. “All resistance traits will be effective for longer periods of time if they are used judiciously,” says Christianson. “Choosing resistant seed is only one part of a successful disease management strategy. Growers need to include crop rotation, field scouting and early detection of clubroot, and minimizing soil movement between fields on equipment.”

Falak agrees. He says following a proper canola rotation as well as rotation of resistance genes, combined with preventing soil movement and other agronomic measures “would enable sustainable clubroot management that would prolong efficacy of any new resistance sources that are introduced.”