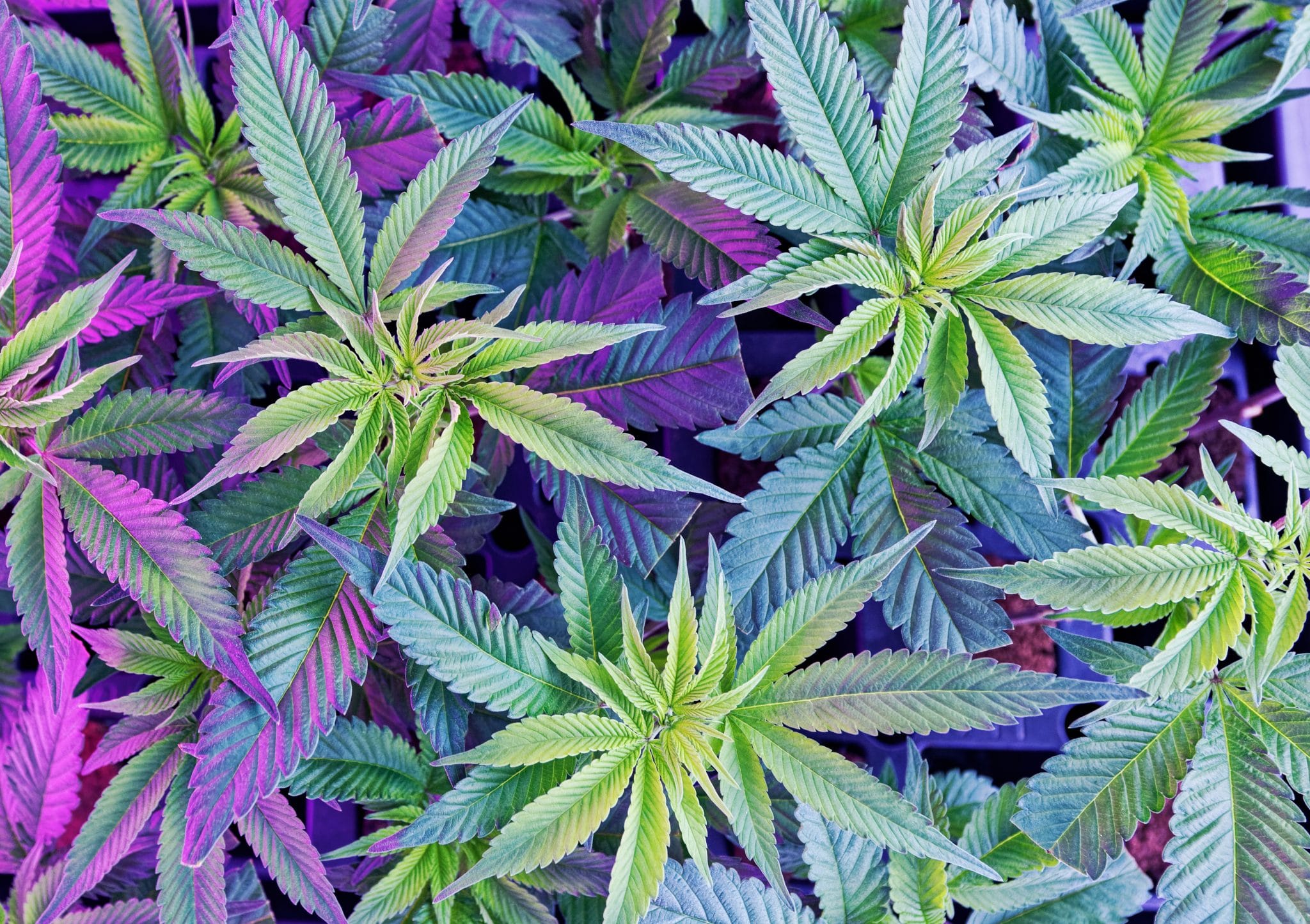 After using medicinal cannabis to treat her migraines, Alberta farmer Serena Donovan decided to diversify her family farm by starting to grow it herself.

Growing up, Serena Donovan always viewed cannabis in the lens that most people do — an illegal drug, used for a recreational high. However, with an increasing number of people turning to medical cannabis in the last number of years to treat everything from migraines to MS, she found herself turning to it to treat her debilitating migraines

“I didn’t tell anybody but went and saw a cannabis doctor. I had a lot of shame and fear over judgement of even thinking of trying cannabis as a medical substance,” Donovan explains in a phone interview. “Honestly, within the first month, I had a reduction to maybe 10 (days of migraines) instead of 16 (a month). And the next was even less.” 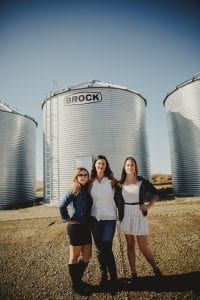 From left to right Grace, Serena and Julia Donavon on their farm in Vulcan County, Alta. where the three work together growing cannabis. Photo: Serena Donovan

As Donovan settled into her new migraine treatment, she took on a new position in her community as a county councillor for Vulcan County. Donovan lives in the county with her husband, Ian, and five kids, farming on Ian’s family’s fourth generation 3,000-acre grain farm.

Through her new councillor position, Donovan started attending farm conferences where she started debating how her family’s farm should diversify through special crops. At around the same time, the legalization of recreational cannabis was coming to fruition, which got Donovan thinking, why not grow cannabis?

She approached her family, explaining her use of medicinal cannabis and plans to grow it — and was met by mixed reactions. Ian was cautious, having been raised similar to Donovan, viewing cannabis as a drug used for getting high, rather than an aide for medical conditions. Her son Robert who worked on the farm was not very impressed, while her two daughters, Julia and Grace, were both intrigued and supportive of their mother’s business idea.

Once her family came around, Donovan started taking courses at Mount Royal University (MRU) about cannabis branding and production. She also read the Cannabis Act in order to fully understand the government regulations.

After federal legalization took full affect, Vulcan County had to amend their municipal Land Use Bylaw and started its own research into the cannabis industry to decide whether or not to allow production in their county. Donovan lent her newfound cannabis industry expertise to the discussion, which helped the council decide to allow production in their county. When she applied herself to grow, she recused herself as a councillor from the discussion and decision to avoid any conflict of interest.

“For the most part, it was very positive. The community has welcomed my application and my facility. And so that was very good not to get pushback from the community, because if you can’t get support and approval at municipal level, you can’t get it off the ground,” Donovan says.

Planning Out the New Business

As part of Donovan’s coursework at MRU she started developing a business plan and deciding on how she would grow cannabis. She quickly decided she wanted to use a grow system within her facility where she would be able to separate and segregate her crops in order to limit losses from wide-spread crop failures.

Donovan first looked at buying a grow system made from retrofitted shipping containers from a California company. However, it was going to cost way too much with the exchange rate and shipping to bring them to Alberta.

She also looked into buying a system from Switch Grow Solutions in Calgary, who had production pods and are known for their LED lighting systems. However, their production pods were still being developed.

Someone then mentioned Winnipeg, Man.-based Delta 9 to her. The cannabis company, which originally started as a medicinal producer in 2013 and then expanded into the recreational market in 2018, was starting to sell its trademarked grow pods to entrepreneurs. 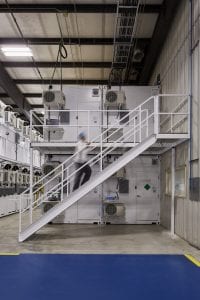 “We saw this as our kind of opportunity to build a turnkey platform for the cannabis industry — entrepreneurs that are wanting to get in on the cultivation side of the business particularly,” John Arbuthnot, CEO of Delta 9, says in a phone interview.

Delta 9’s grow pods are retrofitted shipping containers installed with customized wall panels, lighting, HVAC and security. As part of their turnkey platform, Delta 9 sells the grow pods to entrepreneurs, assists with facility design and layout, sanitation program, standard operating procedures, and buys back cannabis produced by the entrepreneurs to sell in Delta9 stores under the Delta 9 craft cannabis brand or with the grower’s company’s name on it.

The proprietary grow method allows growers to “really leverage everything that we’ve done here successfully in our large-scale site in Manitoba, and package that and hand that over to the entrepreneur so that they can start to operate their own facility,” Arbuthnot explains.

After getting in touch with Delta 9, Donovan quickly realized their turnkey production option would work for her. She then got to work on getting her facility built and began working with Delta 9 as one of their first farmer entrepreneurs.

“Being the first is a wonderful honour. Being the guinea pig has been stressful,” Donovan says. “We’re working out the kinks. We all have a lot of graciousness between our teams and we’re learning from it, which will make it easier for everybody else coming after me.”

For a production facility, Donovan took over her husband’s 60 by 120-foot cold storage shed. She insulated and tinned the building, poured a concrete floor, added electrical and water hookups and built offices.

During this time Donovan was going through the licensing process with Health Canada. She started it in April 2019 and received final approval in February 2020. Throughout the whole process the business was self-funded through the family’s farm and personal finances.

“It’s long, but it’s also so short (of a process). Every month seems like a year. But we’ve done this in under 12 months, built and got licensed in literally 10 months,” Donovan says.

Throughout the whole process though, Donovan had a backup plan for if she didn’t get licensed for cannabis production. She planned to grow microgreens, wasabi or tea in the grow pods instead.

Donovan’s daughters, Julia and Grace, were her first employees. The two had been supportive of their mother’s business endeavour and both decided they wanted to work at it. Once Donovan received her license, the three of them got to work. 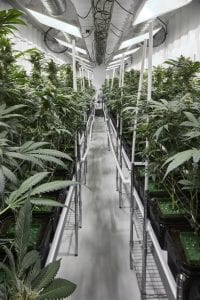 Donovan handles the business side of things; Julia is the head grower and Grace is in charge of integrated pest management and quality assurance. Since they started growing cannabis the business has expanded to include five more full-time employees and four part-time employees.

The business has 10 flowering pods and two support pods, one of which is used as a nursery and the other as the harvest and drying area.

All product being produced is being sold to Delta 9 for sale in their stores under Donovan’s business’ name, Because You Cann, which she picked to help encourage people to step outside their comfort zone and try cannabis themselves.

“For me the voice that I wanted other women to hear is you can use this plant shame free. My hashtag #ICANNYOUCANN, says it all — I cannabis, you cannabis,” Donovan explains.

For now, Donovan is focusing on getting her first crops harvested. Within the first year she plans to decide, along with her daughters, if they need to or want to expand their production.

END_OF_DOCUMENT_TOKEN_TO_BE_REPLACED 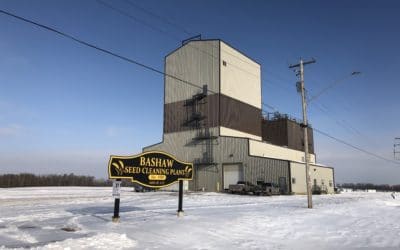 Building a Sense of Community at Bashaw Seed Cleaning Co-op