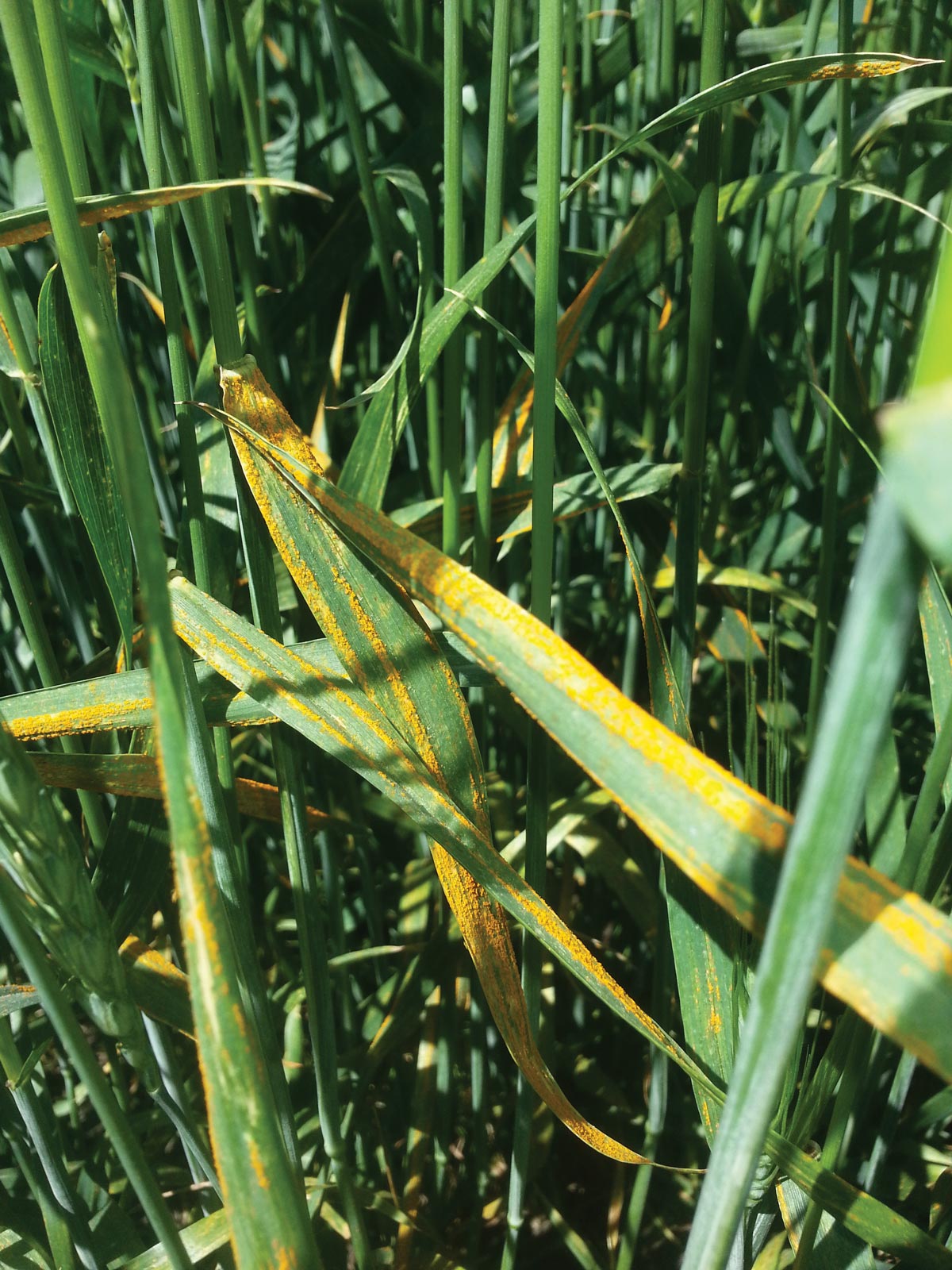 Samples of stripe rust-infected winter wheat were also observed in breeding plots and commercial fields near Lacombe and Bentley. Kumar and Xi suggested that as theyâ€™d never before observed such severe early infection, the stripe rust pathogen might have overwintered in central Alberta.

According to Michael Harding, a research scientist with AARD, it is unusual for the stripe rust pathogen (Puccinia striiformis) to overwinter in Alberta. Most years, he says, it enters the province from a westerly direction â€” the Pacific Northwest states, where it normally overwinters.

â€œDue to the predominant westerly wind trajectories, the disease is almost always observed first in southwestern Alberta because it is the first region in Alberta along the natural dissemination pathway to receive stripe rust spore showers from the overwintering sources in the USA,â€ Harding notes. â€œAfter appearing in southwestern Alberta, the disease will move north and east depending on prevailing winds and environmental conditions.â€

Xi and Kumar confirmed the overwintering potential, Harding explains, by collecting leaf samples from beneath snow drifts and bringing them indoors for testing. Their findings were illuminative: they discovered that viable stripe rust infections were surviving through the winter under the insulated snow cover.

Denis Gaudet, a cereal pathologist with Agriculture and Agri-Food Canada (AAFC), believes there is plenty of merit to Xi and Kumarâ€™s claims. â€œI would concur with their assessment,â€ he says. â€œThe onset of moderate to severe symptoms early in the growth season that was observed in Olds is not typical of the usual spring infection pattern, which is a trace to light infection, or less than one per cent severity.â€

Secondly, Gaudet says, the region frequently has an uninterrupted snow cover during the winter that helps protect the fungus and plant tissues from cold injury and death, which can lead to widespread survival of stripe rust from a fall infection throughout the winter.

There are other possible reasons for early infection, however. â€œIt is possible that heavy spore showers originating from the Pacific Northwest USA occurred in early spring and this could have accounted for the early, severe stripe rust observed,â€ he says. â€œCool, moist growing conditions during the early spring would have promoted the development of the fungus in the wheat plant.â€

Regardless of the causes for the early development of stripe rust in central Alberta, seed growers and farmers should be on high alert early in 2015 and use proactive management techniques to ensure minimal damage in winter wheat. 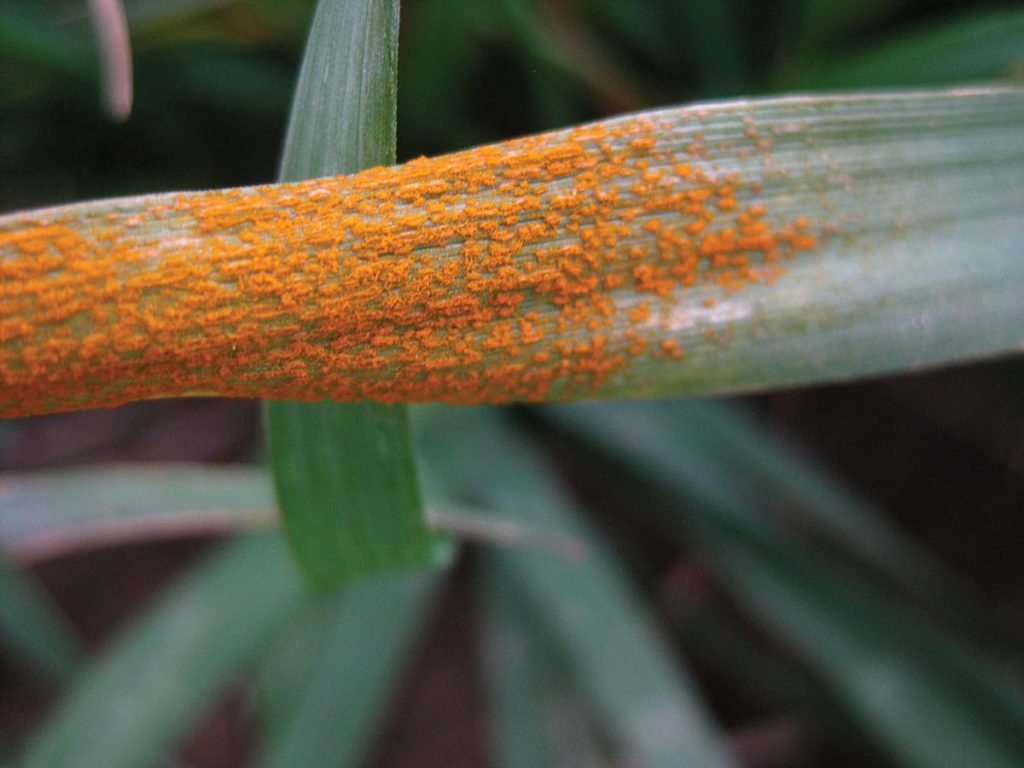 Harding says the use of cereal cultivars with resistance to stripe rust is the most important strategy seed growers and farmers can employ to combat the disease.

â€œIn cases where stripe rust resistance is not available, management of the disease can be achieved by vigilant scouting and timely fungicide applications,â€ Harding notes. â€œStripe rust disease can develop and spread very, very rapidly, so frequent scouting for the characteristic stripes that have orange spore pustules is critical.â€

He says fungicides may be applied preventatively â€” in other words, for susceptible varieties, fungicides should either be applied in advance or as soon as stripes appear if stripe rust has been reported in the region. Applying upper canopy leaves with fungicide (flag leaves and penultimate leaves) will help avoid yield loss, because these two leaves are the greatest contributors to yield in cereals. If the disease is not present on the upper leaves, or comes in late in the season when grain fill will no longer be affected, the use of fungicides is not cost-effective.

â€œThe optimum time for applying fungicides is around flowering, during which these two leaves are fully expanded,â€ Gaudet explains. â€œIf fungicides are applied too early in the growing season before full development and extension of these two leaves, an additional spray may be necessary. Monitor fields for stripe rust, and if incidence or severity levels exceed five per cent, particularly in June and July, fungicides can be applied.â€

â€œNew sources of resistance are being incorporated and stacked so that the resistance will be long lasting.â€

Gaudetâ€™s team at the Lethbridge Research Centre performs weekly stripe rust surveillance in southern Alberta during the summer months and offers fungicide recommendations â€” a service that should continue into 2015.

Harding and Gaudet both caution that issues with stripe rust infecting and overwintering in the fall-sown winter wheat can also be avoided if growers resist seeding winter wheat too early â€” in August or early September â€” because this can create a â€œgreen bridgeâ€ between the spring wheat crop and the winter wheat crop.

Robert Graf, a research scientist in winter wheat breeding with Agriculture and Agri-Food Canada, says that the variety Radiant, which carries Yr10, was effective in resisting stripe rust until a few years ago, when new strains of stripe rust began to overcome its resistance.

â€œThe good news is that there are some new winter wheat varieties that have effective resistance,â€ he says.

Varieties classified by the Alberta Seed Guide as boasting varying levels of resistance to stripe rust include the following:

Among the General Purpose winter wheat varieties, these have â€œmoderate resistanceâ€:

Gaudetâ€™s team has already observed stripe rust pustules in winter wheat seeded this fall during a recent survey of Southern Alberta. â€œWe will be monitoring the survival of stripe rust throughout the winter so we will have an answer by next spring.â€

Stripe rust can only survive on a living host, but it can move into a fall-seeded crop from a spring-seeded crop if the former is planted too early, or if volunteer cereals are growing nearby. â€œIn rare instances where stripe rust overwinters on a winter wheat crop, or on grassy or cereal volunteers, there a bridge from one green crop to another, and from one season to the next,â€ Harding says. 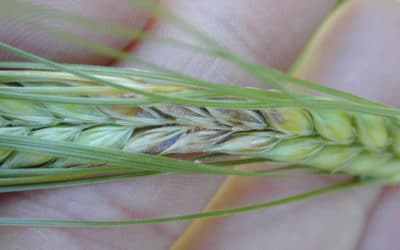 Cereal growers in Alberta have a new weapon in the fight against fusarium head blight (FHB). It’s an online risk assessment...

END_OF_DOCUMENT_TOKEN_TO_BE_REPLACED 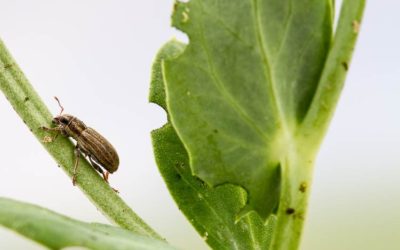 Specialists at Alberta Agriculture and Forestry (AF) are working to have fields predetermined for the 2018 insect survey...

END_OF_DOCUMENT_TOKEN_TO_BE_REPLACED 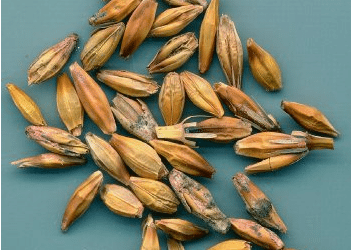