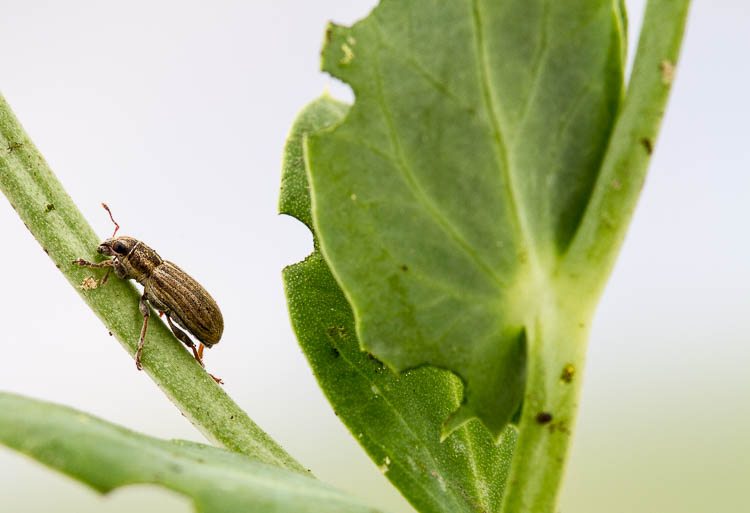 Research shows that treating pea seed with a systemic insecticide product is the most effective control measure to prevent pea leaf weevil damage.

According to a crop specialist with Alberta Agriculture and Forestry, properly inoculated annual legume crops, such as field pea and faba bean, produce most of the nitrogen they require for growth through the growing season via nitrogen fixation carried out by nodules on plant roots.

“Hence, field pea and faba bean are generally grown on nitrogen deficient soil without much, if any, additional synthetic nitrogen fertilizer,” says Neil Whatley. “When the pea leaf weevil insect pest feeds on the nodules of pea and faba bean seedlings, this natural nitrogen source is greatly compromised, inhibiting optimal pea and faba bean growth throughout the remainder of the growing season as well as decreasing crop yield.”

The pea leaf weevil was reported in southern Alberta in 1997 and remained for several years south of Hwy 1. Since 2013, this insect’s geographic range has greatly expanded into central Alberta, extending as far north as Sturgeon County, north of Edmonton, with lower levels of feeding reported in east central Alberta.

“Given that 2016 survey levels were high in the aforementioned areas, there’s a high risk of infestation in the same areas if winter and spring conditions are favourable,” notes Whatley. “A potential predictor of population increase is precipitation in August. As many areas with high weevil populations in 2016 experienced August precipitation, pea and faba bean producers in these areas are advised to plan control strategies for the 2017 crop year.” 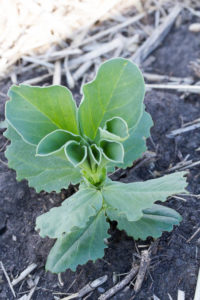 After spending the winter as an adult beetle in perennial legumes, adults are attracted to annual and perennial legume crops in spring, including field pea, faba bean, lentil, alfalfa and bean. “However, egg laying only takes place in soil near field pea or faba bean seedlings, so root nodules of lentil and alfalfa, for example, are not affected. Just prior to egg laying, adult pea leaf weevil insects feed on the margins of seedling leaves resulting in a notched or scalloped leaf appearance, which is not expected to reduce yield. After hatching from eggs, the worm-like larvae proceed downward into the soil where they primarily feed on root nodules resulting in decreased nitrogen fixation by pea and faba bean plants.”

“Weevils arrive early to pea and faba bean fields if warm temperatures above 20 C persist for more than a few days in late April or early May, potentially corresponding with higher yield losses. Alternatively, if cool weather occurs during the same period, yield is generally not as compromised, especially when the crop advances past the sixth node stage before the weevils arrive. In either case, field scouting is required to make control decisions on a field by field basis. It’s also advised not to seed into cold soil.”

Yield losses may occur when there are more than 30 per cent of seedlings (three out of 10 plants along a seed row; assess groups of 10 plants in multiple rows) with feeding damage on the clam leaf before the sixth node stage in peas. The clam leaf is the most recently emerged leaf.

“Most research hasn’t shown that control of weevils using foliar insecticide prevents yield loss. The ineffectiveness of foliar spraying probably arises because weevils have already laid enough eggs to significantly damage root nodules when sprays are applied or because healthy weevils immigrate after spraying,” says Whatley. “According to research on the Prairies, nodule protection is more effective when pea seed is treated with a systemic insecticide product prior to seeding. Faba bean may be similarly protected, but this requires investigation.”

If feeding damage is only apparent on the older, lower leaves and not on the newer clam leaf, says Whatley, the weevil has probably already laid eggs and spraying would be of no value.

“As such, producers should scout for damage on the clam leaf and not on lower leaves. Since pea leaf weevils migrate into field pea and faba bean fields, foliar damage is initially observed along field edges. Foliar insecticides applied early in an infestation to field edges may be a sound economic decision; however, additional on-farm research will provide more clarity.”