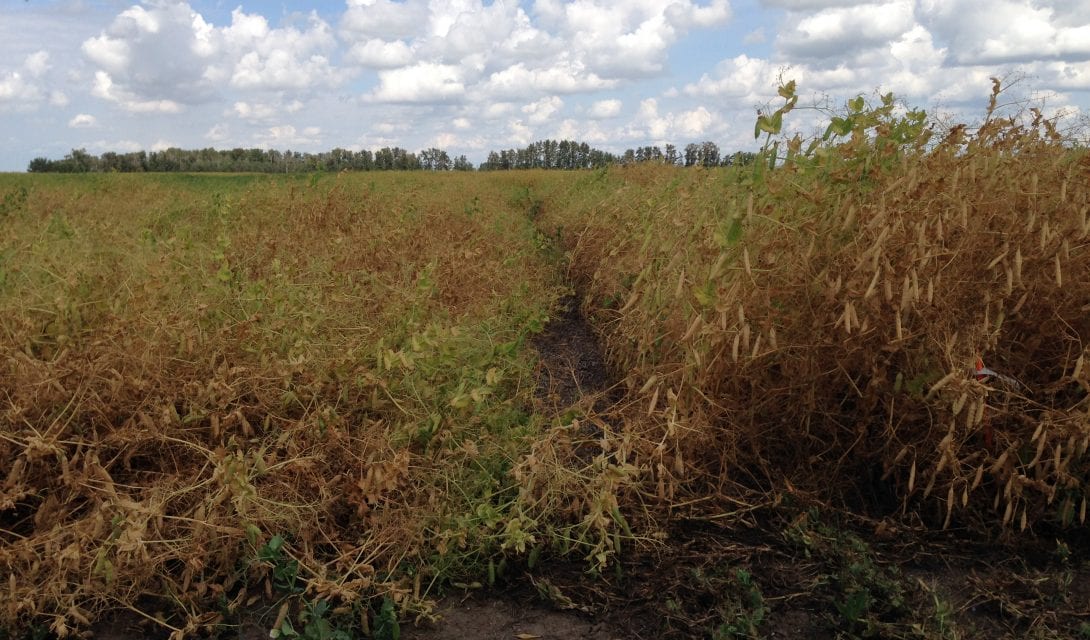 Improvements in genetics and disease management have significantly improved the harvestability of peas, however keeping the crop standing remains one of the biggest challenges in field pea production. Photo Sheri Strydhorst

With extreme lodging, it can take as much as five days to harvest a quarter-section of peas. A four-year project examined two possible ways to boost standability — inter-row seeding and PGRs.

Why is it some farmers who can grow peas don’t grow peas? For many, the answer is the crop frequently lodges and can be extremely time-consuming to harvest.

Research helps improve standability, therefore, has tremendous value for pea growers and the industry. Between 2014 and 2018, Alberta Agriculture and Forestry Agronomy Research Scientist Sheri Strydhorst carefully examined two ideas for their potential to improve the standability and harvestability of field peas.

Some Alberta farmers have reportedly improved their pea standability through the resourceful technique of seeding peas into standing wheat stubble. In concept, the sturdy wheat stubble props up the peas.

Strydhorst tried this idea at three sites in the central and Peace regions of Alberta by inter-row seeding peas into 8-inch and 12-inch wheat stubble. A check treatment had no wheat stubble.

“When there was lodging, stubble did improve standability about a quarter of the time,” Strydhorst says. “What surprised us was the other positive benefits we got, including reduced days to maturity and larger seed size.”

At the field level, growers can implement this low-cost practice to improve field pea standability fairly easily. By seeding in the same direction as the standing stubble, keeping the stubble tall and using the nudge feature on their GPS, about 70 per cent to 90 per cent of plants will be ‘accidentally’ inter-row seeded.

The other idea Strydhorst has been testing is whether applying plant growth regulators (PGRs) would improve standability in pea crops. While Strydhorst gave the inter-row seeding idea a qualified yes, her ruling on PGRs was not so enthusiastic.

“We tested three different active ingredients using different rates and in different combinations,” she says. “Often it felt like we were spraying water. That’s how ineffective it was.”

Strydhorst wouldn’t recommend PGRs for field peas because using them showed no consistent improvement in height, standability, yield or seed size. In fact, if the pea crop was under stress due to heat or drought, PGRs actually reduced yield.

Although her research showed CDC Meadow responded slightly better to PGRs than AAC Lacombe, Strydhorst indicates further investigation may be needed to identify pea cultivars which might be more responsive to PGRs.

Strydhorst can relate to the frustration growers feel with pea standability. In her research plots, in fact, moderate to severe lodging occurred about 63 per cent of the time. This is a challenge which needs solving in order for Alberta’s pea growers and the industry to thrive.

“It’s a terrible headache when you have your pea crop go down,” Strydhorst says. “I’m not sure PGRs are the solution, but we do need to put significant agronomic effort into finding a solution for standability. Breeding will help but breeding alone isn’t the answer.”