Missing Plants. What’s The Cause? 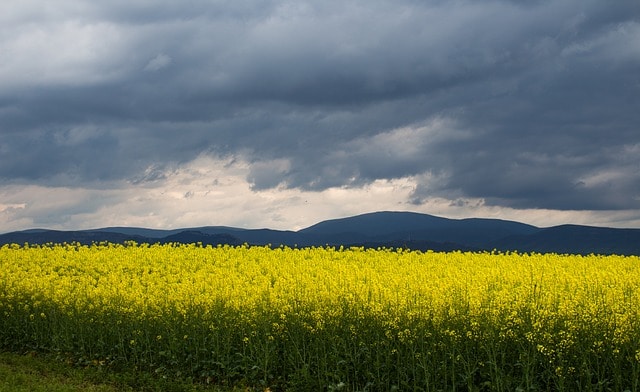 Many factors can cause a thin canola stand. Proper diagnosis is important for effective management. Here are common factors, with diagnosis tips for each.

Herbicide carryover will be most severe in areas where application rates were the highest – areas of headland overlaps, for example – and in areas that tend to be drier. Hilltops are more susceptible since they can be lower in organic matter, reducing the buffering capacity of those areas, and they remain drier, resulting in less opportunity for breakdown to occur. Check page 79 of the Guide to Crop Protection for a list of residual herbicides and the recropping restrictions for each.

Fertilizer toxicity. High rates of nitrogen, sulphur and even phosphorus placed in the seed row can greatly increase mortality if the seeding equipment has low seed bed utilization (SBU). Low moisture conditions will make damage worse. Toxicity damage often occurs in patterns, being worse in dryer or lighter parts of the field that don’t have the moisture to diffuse fertilizer concentrations beside the seed. You may also notice differences row to row if some openers are worn more than others and not providing required seed/fertilizer separation. Why limit seed-placed fertilizer?

Excess moisture. Flooded soils can stop root function and kill canola seedlings within a matter or days. Bottom leaves will tend to yellow first. This damage will be more common in low spots. Read more.

Frost damage. Frost can cause leaves to turn yellow or brown, then dry up and fall off. Severe frost damage can also cause pinching of the stem up near the growing point, closer to the cotyledon. Disease can also cause pinching of the stem, but disease pinching tends to occur closer to the soil surface or below the surface where the hypocotyl remains white. Regular scouting makes this diagnosis easier, especially if you know the stand looked good the day before a frost.

Wind. This year strong winds sheared off some canola seedlings and blew away the top inch of soil and the seed along with it in some areas, while burying small seedlings in others. This will create patches within a field. If winds have been heavier than usual, consider this possibility. Losses will tend to be worse on hilltops.

Cracked seed. Seed that is very dry is more prone to cracking as it moves through the drill, which can reduce germination rates. A slower fan speed will help to reduce damage.

Seed rate. If the seed is good but the stand is spotty throughout the field, the seeding rate may have been too low. Large seed (high TKW) seeded at a low seeding rate may provide only a few plants per square foot. Proper calibration is another potential factor, especially with a new drill. Did the drill meter out the seed counts intended?  It is difficult to scout for a “lack” of seeds, but look in the seed row close to plants that have emerged for any ungerminated seeds or signs of seedling mortality, to rule out other causes.

Insect damage. Cutworms and wireworms can wipe out young canola plants before emergence or shortly thereafter. Start scouting for damaged or missing plants on a weekly basis once the crop starts to come up. Cutworm feeding results in notched, wilted, dead, or cut-off plants. With wireworms and sometimes with cutworms, the plants may not emerge at all. Patterns confined to hill tops, side hills, water runs or field edges often suggests environmental, disease or insect problems.

Seeder issues. Repeatable patterns in rows or groups of rows usually suggest a mechanical issue with the drill. Single rows could be plugged. Whole manifolds could have plugged feeder hoses. One wing of the drill could be going deeper. Shanks could be stretched. Openers behind the tractor wheels could be worn more than others and not placing seed properly. The pattern can often tell you where on the machine the problem occurred. Packing pressure, residue management, opener type and seeder type can all influence seed placement and stand establishment. Disk versus knife openers have pros and cons depending on soil type, moisture, residue, and seed bed quality.

In some cases we can never really know for sure the causes for a thin stand. In those cases, the best action might be to do nothing and hope the crop recovers. There is no sense spending money on a cure when you don’t know the problem.