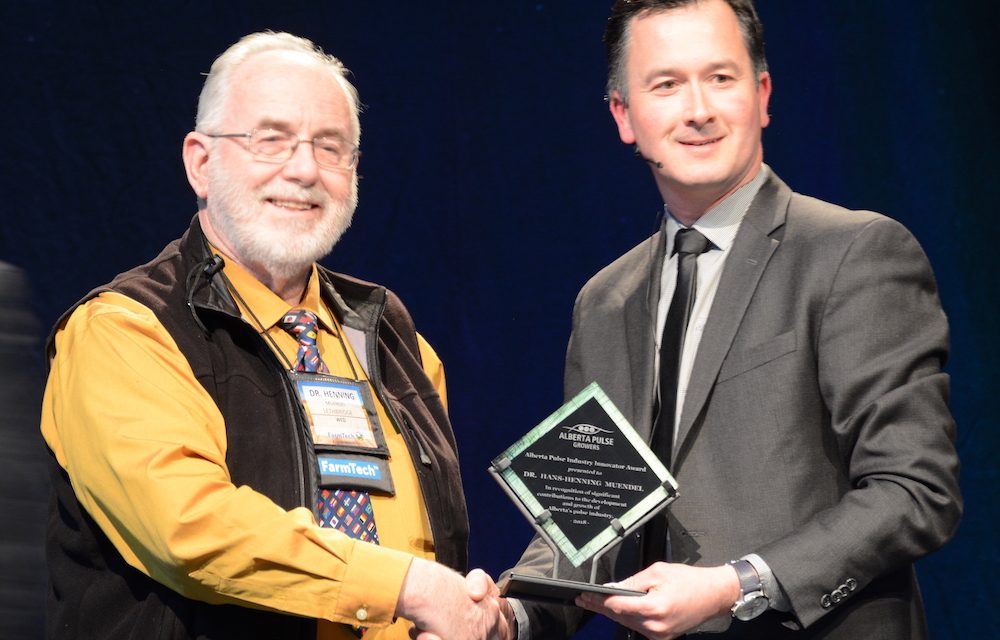 “Each year, APG recognizes a person or organization whose progressive thinking and tireless efforts helped build Alberta’s pulse industry into the flourishing sector that it is today,” said APG Chair D’Arcy Hilgartner. “Dr. Muendel dedicated his career to developing the dry bean cultivars that now set the standard for small red, black, pinto and great northern cultivars in Western Canada. He truly deserves to receive the Alberta Pulse Industry Innovator Award for his many contributions.”

In 1996, there weren’t any dry bean cultivars being grown in Western Canada that had been bred in this region. Over the next 11 years, as the senior research scientist at the Agriculture and Agri-Food Canada Research Centre in Lethbridge, Muendel and his team developed 14 dry bean cultivars in seven bean classes, and co-developed one other new bean cultivar. Muendel’s bean breeding program concentrated on producing early maturing, upright bean cultivars that are well-suited to the short growing seasons of southern Alberta, Saskatchewan and Manitoba. Many of the dry bean cultivars from Muendel’s program also had improved resistance to white mould while maintaining high yield and quality. Muendel also served as an ex-officio director for Alberta Pulse Growers.

Zone 1 Director Rodney Volk had high praise for Muendel’s contributions to the pulse industry that continue to benefit dry bean growers like himself.

“Dr. Muendel was instrumental in establishing the breeding program that developed dry bean cultivars specific to southern Alberta growing conditions,” Volk said. “The success of dry bean production in southern Alberta today can be largely credited to his program’s development of local varieties with improved standability and disease resistance. Many of today’s pinto and great northern varieties still have a direct connection to the lines Dr. Muendel developed.”

Muendel said that he was honoured to learn that he was chosen as the recipient of the fourth annual Industry Innovator Award: “It has been 10 years since I retired, and now – with our bean varieties having spread throughout the Alberta dry bean growing area – on behalf of my breeding team, it is such an honour to accept this award.”

The Alberta Pulse Growers Commission represents 6,000 growers of field pea, dry bean, lentil, chickpea, faba bean and soybean in Alberta. Our vision is to have Alberta pulses recognized by consumers as environmentally friendly, healthy, nutritious, and recognized by all producers as being an essential element in a sustainable cropping system.