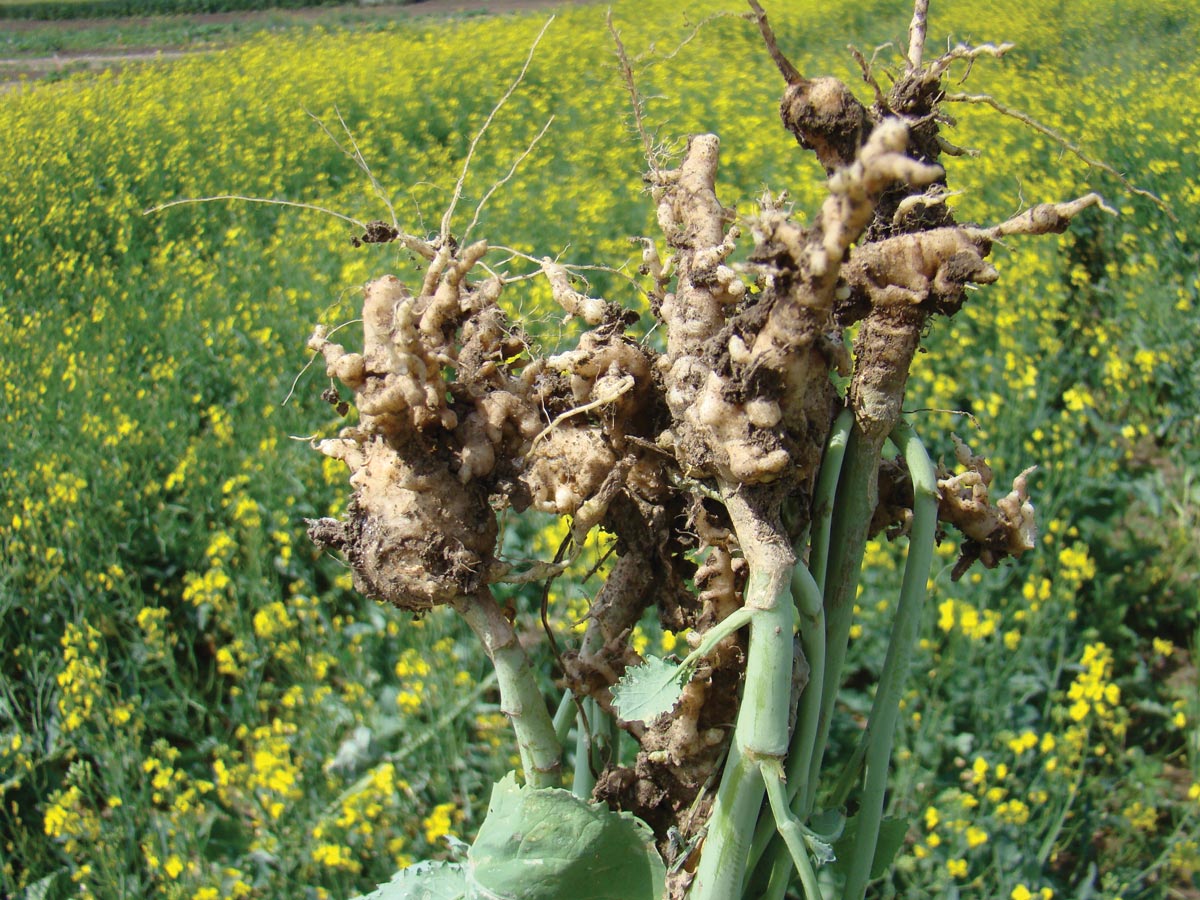 Alberta researchers have identified a new clubroot pathotype. Proactive management will be key in 2015.

A new clubroot pathotype that can overcome clubroot resistance has been confirmed in Alberta fields.

A 2014 clubroot survey written by a team of researchers headed by Stephen Strelkov, division director of Plant BioSystems and professor at the University of Alberta, claims that 648 commercial canola crops in 36 counties and municipalities in Alberta were surveyed, to reveal 104 new cases of clubroot. â€œAdditional surveys by county and municipal personnel identified another 279 new records of the disease, for a total of 383 clubroot-infested fields in 2014,â€ the survey states.

Of the fields surveyed, several planted to resistant canola were found to have mild to medium levels of clubroot infection â€” signs of a pathotype that can overcome clubroot resistance.

The new strain caused almost 100 per cent damage in the greenhouse trial, even though the canola variety used was resistant to existing clubroot pathogens.

This year, Strelkovâ€™s team tested seed from all major companies. â€œWe wanted to find out whether the other varieties were holding up against this strain,â€ says Strelkov. â€œWe inoculated products from all the different companies and we discovered this new strain could overcome all of the current resistant varieties in use.â€

Strelkov and his team have been working with Alberta Agriculture and Rural Development (AARD) and the Canola Council to collect samples and conduct further testing.

The pathotype was identified this year in many fields where clubroot had not previously been confirmed. Even though the damage in those fields was low to moderate, Strelkov says there might be a yield impact down the road, especially in areas where the problem continues to intensify.

Michael Harding, a research scientist with AARD, says the findings have serious implications for canola growers in Alberta. â€œThe appearance of a new pathotype that can overcome the clubroot resistance is of great concern, especially since all of our currently available clubroot-resistant cultivars are ineffective against this pathotype,â€ he says.

Harding believes the findings, while worrying, are not surprising in the larger context of clubroot resistance gene deployment in other areas of the world. â€œThe clubroot pathogen is a very difficult organism to stay ahead of in terms of deployment of major gene resistance because it has the capacity to generate great diversity (pathotypes) and produce extremely high numbers of long-lived resting spores,â€ he says.

Added together, high diversity, â€œextreme reproductive potential,â€ and the pathotypesâ€™ ability to survive long periods of time in the soil means that new pathotypes can develop after only two or three resistant crop cycles, Harding argues.

AARD continues to assess the situation with surveillance and research activities to analyze the new pathotype. Harding says damage in 2015 will be dependent on a variety of factors. â€œFirst, the environment will determine the clubroot disease potential to some extent. A dry spring will be less conducive for disease development,â€ he says.

Crop history and rotation will also have impact on specific regionsâ€™ susceptibility to the new pathotype. Growers who emphasize biosecurity and sanitization to prevent movement of infested soil on their operations will have a better chance of preventing new infestations.

In Strelkovâ€™s view, the most valuable tool for managing clubroot resistance is the continued use of resistant varieties. In cases where resistance has been overcome, longer rotations are warranted and can help maintain the integrity of the resistance by reducing selection pressure on the pathogen.

The University of Albertaâ€™s canola breeding and research team has developed a great deal of germplasm which is currently being screened against the new pathogen, according to Habibur Rahman, a research scientist with the department of Agricultural, Food and Nutritional Science. Rahman says the team has completed one round of tests and is currently completing its second round.

â€œResistance is a most useful and important tool to manage the disease, and in areas where clubroot is very severe, longer rotations are warranted.â€
â€” Stephen Strelkov

â€œBy the end of this year weâ€™ll know if we have resistance to this pathotype,â€ he says. Itâ€™s too soon to say whether the results of those tests might lead to new varieties resistant to the new clubroot pathotypes, but in the meantime, growers cannot afford to bypass best management practices.

Harding seconds the claim that sanitization is key. â€œProper sanitization of any equipment carrying soil will reduce the spread of disease,â€ he says. â€œSanitization involves cleaning all soil and organic material from equipment and then applying a disinfectant to kill any remaining spores.â€

But Harding claims that scouting should be the first step in managing clubroot, beginning at flowering and ending at swathing. â€œEarly detection of clubroot could mean the difference between a problem that is 10 m2 as opposed to one that goes unnoticed and becomes a problem across an area of 25 ha or larger,â€ he says.

A good way to begin scouting is at the entrance to fields â€” growers should pull 50 to 100 plants and inspect the roots for signs of clubroot. Patches of dead or prematurely ripened plants should also be inspected.

Minimizing tillage is another recommended strategy for minimizing the spread of the pathogen.

According to Clint Jurke, agronomy director at the Canola Council of Canada, an integrated system of good stewardship practices will help mitigate the problem. A combined strategy including the use of resistant varieties, lengthy rotations in infested fields, vigilant weed control, reduced or zero tillage and equipment sanitization is the best bet for growers in high-risk clubroot zones.

According to Clint Jurke, agronomy director at the Canola Council of Canada, blackleg heavily infected some fields in Alberta in 2014.

â€œWe recommend that growers scout for blackleg more thoroughly at harvest each year to determine if it is becoming a problem in their farming situation,â€ says Jurke. â€œIf it is increasing, [growers] need to lengthen their rotation, or start changing varieties that they plant in order to reduce the potential for the disease.

â€Michael Harding, a research scientist with AARD, says blackleg was not worse in 2014 in Alberta compared to previous years, but was still present in most canola fields.

Strategies for stewardship include practices such as scouting, growing blackleg-resistant cultivars, and the use of three- to four-year rotations. â€œBlackleg management may also benefit from use of registered seed treatments and foliar-applied fungicides,â€ Harding says.