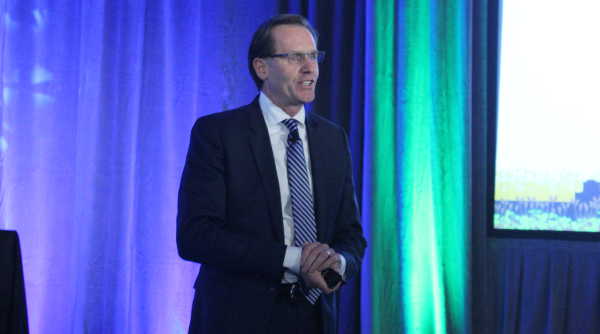 Basse is an economist who has been in the commodity business since 1979. In 1987, heÂ founded AgResource Company, a domestic and international agricultural research firm located in Chicago thatÂ forecasts domestic and world agricultural price trends.

It was a world record year in soybean and wheat production, Basse noted.

â€œItâ€™s the second year in a row this has happened. We didnâ€™t quite do it in corn. We missed it because of excessive wetness in the Midwest and dry weather across the EU,â€ he said.

Global wheat, soy and corn demand is not growing at the pace of supply, however, and that means low commodity prices are the result â€” theyâ€™re at a nine-year low.

World grain/oilseed markets are seeing tightening annual price ranges. Larger stocks are helping to mute the importance of weather, while cheap energy slows future biofuel grain use, Basse said. Both cause speculators to avoid ag investments, which has an effect on the seed sector.

â€œIf trend yields persist, the world will need to find a ways to manage supply,â€ Basse noted.Â â€œFarmers will store as much of their crops as they can, with bankers holding a more important role as to when sales are made.â€

â€œAccording to the UN and FAO, world population numbers this year will decline. By the time we have 9 billion people, it will be somewhere north of 2065,â€ he said. That means production is higher than demand, leading to uncertainty in agriculture markets.