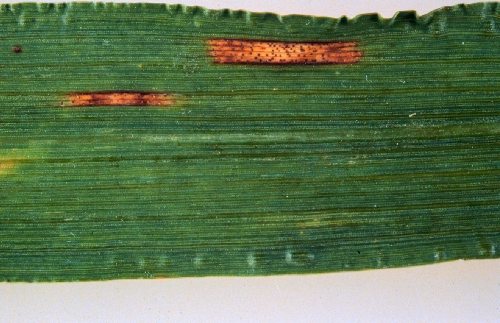 Leaf spot fungal diseases can decrease cereal yield by up to 20 per cent or more, as well as diminish kernel weight, and in some cases reduce grade. This, according to Neil Whatley, crop specialist, Alberta Ag Info Centre.

“When disease risk levels are moderate to high, protection of the upper two leaves of a developing wheat plant with a timely in-crop fungicide application prevents significant losses. With barley, it’s essential to protect the upper three leaves,” he says.

Disease risk level increases when weather conditions are favourable for disease development, cereal crops are frequently grown in the same field, the chosen cereal variety is susceptible to leaf diseases, yield potential is good and crop price is high.

“While scald and net blotch most commonly affect barley, fungal diseases like spot blotch affect all cereal crops. These leaf spot pathogens survive on infected straw residue and stubble from cereal crops grown during the previous two to three years in a particular field. A prolonged period of rainfall, fog or heavy dew combined with moderate air temperatures in June and July raises the risk that these pathogens will produce spores and re-infect young, developing cereal plants.”

Although leaf spot diseases can be present during early plant growth, scouting for cereal leaf diseases is especially important prior to, during, and after flag leaf emergence. “The appearance of moderate levels of disease in the lower canopy indicates there is a risk to the upper canopy leaves,” says Whatley. “Under conditions favourable for disease development, leaf spot disease symptoms appear as tiny water soaked or brown or tan spots or lesions on the leaf surfaces of seedlings and tillering cereal plants. Lesions produce spores that act as the disease transfer mechanism. Under prolonged humid weather conditions, the spots become more visible as they expand and blend together. If the weather turns dry in June and July, risk level diminishes as the leaf spot pathogens remain confined to the lower leaves, causing little overall harm. However, as upper leaves emerge on the developing cereal plants, wind or the splashing motion of rain drops transfer spores from the lower canopy, and possibly from old infested crop residue, to the flag and penultimate (the leaf just below the flag) leaves, increasing the risk that key leaves for yield and grain filling may be compromised. A decision must then be made whether or not to protect the upper leaves with a foliar fungicide application.”

Spores that splash or are blown by wind onto the upper leaves will germinate under favourable conditions allowing the pathogens to infect leaf tissues and cause necrotic lesions on leaf surfaces, potentially resulting in significant loss of green leaf area.

“Preventing the loss of green leaf area on the flag and penultimate leaves is the main concern as optimal sunshine on these leaves contributes to over 50 per cent of the cereal crop’s eventual yield. The goal is to apply a foliar fungicide when the flag leaf has just fully emerged if disease risk level is moderate to high,” says Whatley. “As a rule of thumb, 20 per cent per cent disease coverage of the area of the flag leaf results in a 10 per cent yield decrease, so preventing this amount of disease is usually desirable if yield potential is good and grain prices are fair to high. If a fungicide application is made and weather conditions favourable for disease development persist, a second fungicide application may be necessary just after head emergence, and especially where Fusarium head blight is also a concern.”

Spraying too early or spraying too late results in poor disease control. “While the idea of mixing a half rate of fungicide with a late herbicide application may seem convenient, given that the flag and penultimate leaves are not fully formed, this crop management practice doesn’t directly protect the upper canopy leaves and is generally not economical for leaf spot diseases like tan spot, septoria, scald, net blotch and spot blotch,” notes Whatley. “In contrast, if stripe rust is observed early in the growing season, a fungicide application may be needed before flag leaf emergence and then again later at head emergence if risk is high and the variety is susceptible. It’s preferable to prevent leaf spot diseases with a full rate of fungicide at the flag leaf stage or just after head emergence. However, spraying too late, after the disease is well established on the flag and penultimate leaves, is also not economical because significant green leaf area has already been lost and the fungicide doesn’t cure infected leaf tissue, but instead protects healthy leaf tissue.”

Whether fungicide choice is a systemic or a contact mode of action, the fungicide should be applied directly to the leaves that are important for grain filling, i.e. the flag and penultimate leaves.

“Translocation movement of a systemic fungicide is limited to within an individual leaf and does not occur between leaves,” says Whatley. “Leaf spot pathogens can become resistant to a specific fungicide, so if disease pressure is high enough to spray more than once in the same field during the growing season, or during successive years in the same field, rotate fungicide modes of action. Adequate water volumes ensure optimal leaf coverage and, therefore, optimal disease control, so ten gallons of water per acre is generally applied with the fungicide.”