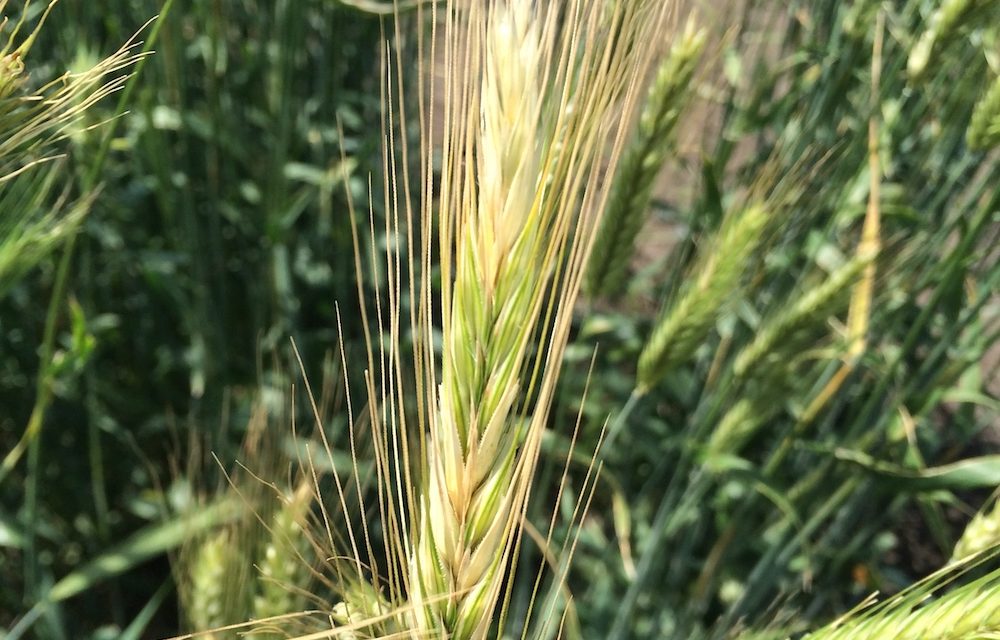 Based on the study's preliminary results, some rye lines, like the one shown here, are susceptible to Fusarium head blight, but most are in the resistant to intermediate range. (Photo: Duoduo Wang, University of Manitoba)

Unlike other cereal crops affected by Fusarium head blight (FHB), very little is known about FHB in fall rye from a Canadian perspective. We don’t know how serious a concern FHB might be in our rye crops. We don’t know which Fusarium species are infecting rye. We don’t have FHB ratings for our current rye varieties. And we have limited information on optimal timing for fungicide applications to manage FHB in rye.

So Jamie Larsen with Agriculture and Agri-Food Canada (AAFC) at Lethbridge and Anita Brûlé-Babel with the University of Manitoba have teamed up on a project to develop FHB-related information and tools that rye growers need.

“This research is new territory from a Canadian and even a North American perspective,” says Larsen, who has breeding programs for open-pollinated fall rye and several other cereals.

“Rye has not had a lot of attention from Canadian researchers and growers for a very long time. But the playing field has changed with the new rye hybrids. They are significantly higher yielding, they are shorter, and they are easier to harvest. So now there is renewed interest in rye,” notes Brûlé-Babel. “It’s important to get a sense of how rye responds to Fusarium head blight and whether there is going to be an issue with the disease and what rye growers should do in conditions where Fusarium is a concern.”

Larsen became interested in the issue due to several factors that have emerged in recent years. “Initially when I started working in rye, I had looked at the literature and I thought the disease wasn’t a major problem. Also, the main areas where rye is traditionally grown – north of Swift Current and around the Great Sand Hills area in Saskatchewan – aren’t huge Fusarium head blight areas. And rye has this natural ability to be tolerant to a lot of diseases. So I wasn’t too worried about Fusarium head blight,” he explains.

“But then I sent some rye varieties to Ontario as checks in a triticale experiment. And as I was walking along in those plots, I saw a rye variety with its head completely glued shut and pink with Fusarium. I’d never seen anything like it.” As well, he found out FHB occurs in Prairie rye crops through his work as the coordinator for the fall rye cooperative registration trial. Each year, the trial is grown at 15 locations across Western Canada, and in some years Fusarium-damaged kernels (FDK) have been found in the grain samples from the trials.

Another driver for Larsen was the potential, especially with the new hybrids, to sell more rye into the feed and food markets. To help in realizing that potential, he saw the need to know more about FHB’s impacts on rye yield and quality – particularly since Fusarium species can release toxins that can limit the use of grain in feed and food – and the need to develop FHB-resistant rye varieties and other tools to manage the disease.

FHB is not common in the Lethbridge area, but it is a widespread concern in Manitoba, and Brûlé-Babel conducts screening for FHB resistance as part of her winter wheat breeding program. So Brûlé-Babel and Larsen brought together their different areas of expertise to develop their plans for the project. Also joining the project is KWS, the German company that has developed several hybrid ryes for Canadian growers.

Brûlé-Babel is screening fall rye lines for FHB resistance at her FHB nurseries at Winnipeg and Carman. To increase the potential for disease development, her research team inoculates the rye lines with Fusarium graminearum, the most common of several Fusarium species that cause FHB in Manitoba cereals.

In 2017, they evaluated about 70 rye lines, including materials from Canada, the United States, Germany, Russia and other countries, as well as lines from Larsen’s breeding program and from KWS. Current Canadian rye cultivars are included in the screening so growers will be able to get information on FHB ratings to help in choosing rye varieties for their farms. For 2018, the researchers have added more rye lines from KWS, so the total is now about 130 lines.

The 2017 results showed that FHB definitely occurs in rye and that some lines are more resistant than others.

“Overall, we’re not seeing very many lines that are as susceptible as our susceptible wheat checks. And most of the rye lines are in the resistant to intermediate range,” notes Brûlé-Babel.

The testing for FDK and DON in the 2017 samples will be done in the coming months by KWS. However, based on what Brûlé-Babel’s team observed in the field and as the grain samples were harvested, it appears that FHB infection often tends to cause the rye plant not to set seed. As a result, the FDK levels are lower than would be expected in a wheat crop with similar field infection levels.

Brûlé-Babel had heard anecdotally through their KWS collaborators that DON levels in rye tend to be quite low. She suspects this could turn out to be true if there aren’t many infected kernels in the harvested grain to contribute to DON in the samples.

“So my guess at this point is that the biggest problem from Fusarium head blight for rye producers might turn out to be yield loss as opposed to a crop that you can’t market [due to FDK and DON],” she says.

Once they have two years of data from the nurseries, Larsen will start making crosses with some of the FHB-resistant lines so he can develop new open-pollinated varieties with this trait.

Brûlé-Babel is also leading two other FHB/rye studies for the project. One study is looking into other Fusarium species that cause FHB in rye. “Not a lot is known about which Fusarium species infect rye [on the Prairies], so we’ve worked with Maria Antonia Henriquez at AAFC’s Morden Research and Development Centre. She does a Fusarium survey every year, collecting diseased plants from [spring wheat and winter wheat fields in Manitoba]. So we asked if she could also collect samples from rye fields,” explains Brûlé-Babel.

One of Brûlé-Babel’s graduate students, Duoduo Wang, has isolated the Fusarium species from the Manitoba rye samples. Wang has identified the species based on the appearance of the fungi when grown in the lab, and she will be doing some DNA marker work to confirm the identifications. The preliminary results indicate that the most common species was Fusarium graminearum, but other species were also present.

In 2018, Wang will be doing a greenhouse study to examine the infection process and see how the different Fusarium species interact with selected rye cultivars.

Brûlé-Babel also points out that, because rye is an outcrossing species, its florets are open for a longer period than the florets of a self-pollinating species like wheat, and it may be that a fungicide might interfere with pollination and seed set in rye.

From the rye lines being screened in the nursery, Wang has selected an FHB-susceptible cultivar, a cultivar with an intermediate response, and an FHB-resistant cultivar to use in the fungicide trials. The trials will take place at Winnipeg and Carman. The fungicide will be Prosaro, a commonly used fungicide that is registered for FHB suppression in wheat and barley.

Larsen hopes they’ll be able to figure out an easy-to-use general rule for FHB fungicide timing in rye similar to the two-days-after-heading guideline for wheat. He adds, “The hybrids are typically a lot more uniform in flowering timing than the open-pollinated ryes, so fungicide timing for open-pollinated ryes might turn out to be a little trickier.”

This pioneering project will lead to practical information, improved varieties and other tools for rye growers in Western Canada and perhaps other regions of the country.

“Providing good information for farmers to make decisions is very important. Part of the reason we’re doing this research is to make sure there won’t be any surprises in terms of potential Fusarium problems for rye growers,” Brûlé-Babel says. “I’m quite excited about the revival of interest in rye because it’s a very good crop for many uses and definitely contributes to diversification on the landscape.”