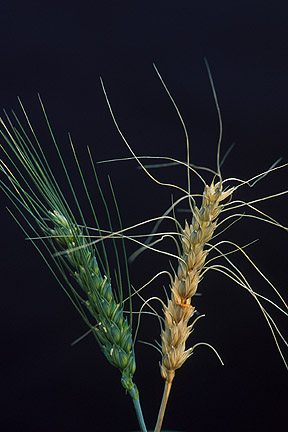 A major breakthrough in the cloning of a resistance gene to eliminate wheat scab â€” a widespread disease responsible for drastic reductions in crop yield as well as millions of dollars in annual losses worldwide â€” has been achieved by a multi-institutional team of researchers including Nidhi Rawat, an assistant professor in the University of Marylandâ€™s College of Agriculture and Natural Resources and Michael O. Pumphrey, associate professor in Washington State Universityâ€™s Crop and Soil Sciences Department, who together performed most of the experimental work.

This discovery has broad implications for the future as a promising source of resistance to not only wheat scab, but a variety of similar host plants affected by the fungal pathogen known as Fusarium graminearum.

Ultimately, once the nature of gene action is known, the findings can be applied to control other Fusarium species which causes rot in cucurbit, tomato and potato to name a few.

Fusarium graminearum produces a toxin that makes the infected crop unfit for human and animal consumption. James Anderson, a professor of wheat breeding and genetics at the University of Minnesota, said there are frequent epidemics of the disease reported in the United States, Canada, Europe, Asia and South America.

Historically, wheat scab â€” otherwise known as Fusarium head blight (FHB) â€” has been a very difficult problem to solve. Twenty years of research that includes input from scientists in China and several American Universities has been slow to produce results, with resistance only found in a select group of local Chinese plants.

Until now, nothing was known about the Fhb1 gene and its ability to provide broad-spectrum resistance. The multi-University team, which also included researchers from Kansas State University and the University of Minnesota, used sophisticated wheat genome sequencing techniques to isolate the gene. Now that the DNA source of the resistance is known, processes that would take years to replicate can be done in much quicker fashion in a diagnostics lab. The team recently published their work in Nature Genetics.

â€œAfter quite a long research process into Fusarium head blight, we are thrilled to uncover a solution to help the international farming community combat this devastating disease,â€ says Dr. Rawat. â€œFhb1 is very special, as only a few broad-spectrum resistance genes have been cloned so far that provide multi-pathogen resistance. The durability and applicability of Fhb1 puts it in a category all to itself and we must learn how to harness it appropriately.â€

Moving forward, Rawat and her colleagues will work towards utilizing Fhb1 for solving a multitude of diseases caused by the pathogen. Research will involve optimizing the transfer of this resistance to other crops infected by Fusarium species through breeding, transgenic, cis-genic and genome editing techniques.

Funding for this project has been provided by the U.S. Department of Agricultureâ€™s Wheat and Barley Scab Initiative and the National Science Foundation. The agricultural experiment stations at each of the participating universities also provided support.Â