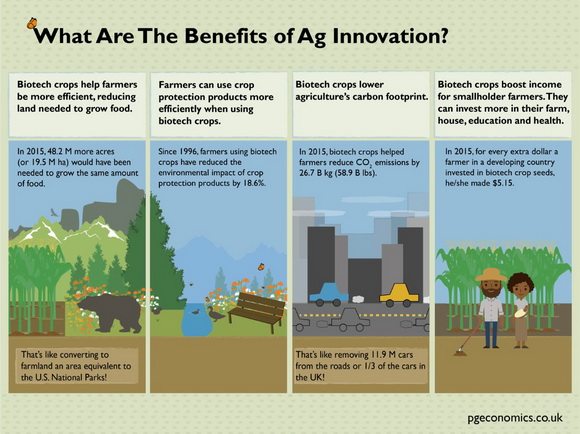 A new report released today by PG Economics has found that over the last 20 years, crop biotechnology has significantly reduced agriculture’s environmental impact and stimulated economic growth in the 26 countries where the technology is used.

“Over the last 20 years, where farmers have been given access to, and the choice of growing biotech/GM crops, they have consistently adopted the technology, contributing to a more sustainable food supply and a better environment where they live,” said Graham Brookes, director of PG Economics, co-author of the report.

Highlights in the peer reviewed report include:

Crop biotechnology has reduced agriculture’s environmental impact
• Crop biotechnology has significantly reduced agriculture’s greenhouse gas emissions by helping farmers adopt more sustainable practices such as reduced tillage, which decreases the burning of fossil fuels and retains more carbon in the soil. Had biotech crops not been grown in 2015, for example, an additional 26.7 billion kilograms of carbon dioxide would have been emitted into the atmosphere, which is the equivalent of adding 11.9 million cars to the roads.

Crop biotechnology has reduced pressure to use new land in agriculture and contributed to global food security
• Biotech crops allow farmers to grow more without needing to use additional land. For example, if crop biotechnology had not been available to farmers in 2015, maintaining global production levels that year would have required the planting of an additional 8.4 million hectares (ha) of soybeans, 7.4 million ha of corn, 3 million ha of cotton and 0.7 million ha of canola. This is equivalent to needing an additional 11 per cent of the arable land in the United States, or roughly 31 per cent of the arable land in Brazil or 13 per cent of the cropping area in China.

Crop biotechnology enables farmers to increase crop yields
• Insect resistant (IR) crop technology used in cotton and corn has consistently improved yields by reducing the damage caused by pests. From 1996 to 2015, across all users of this technology, yields have increased by an average of +13.1 per cent for IR corn and +15 per cent for IR cotton relative to conventional production systems. Farmers who grow IR soybeans commercially in South America have seen an average +9.6 per cent increase in yields since 2013.

• In some countries, herbicide tolerant (HT) technology has improved yields through better weed control. For example, in Bolivia, HT soybeans increased yields by +15 per cent. In Argentina, HT technology has helped farmers grow an additional soybean crop after wheat in the same growing season.

• Biotech farmers in developing countries, many of whom are resource-poor and farm small plots of land, continue to see the highest yield gains from using the technology.

Crop biotechnology supports improved livelihoods, especially for poor, smallholder farmers in developing countries
• By better controlling pests and weeds, crop biotechnology helps farmers increase their yields, which leads to higher incomes and better lives for themselves and their families. In 2015, the net farm level economic benefit was $15.5 billion, equal to an average increase in income of $90/hectare. From 1996 to 2015, the net global farm income benefit was $167.7 billion.