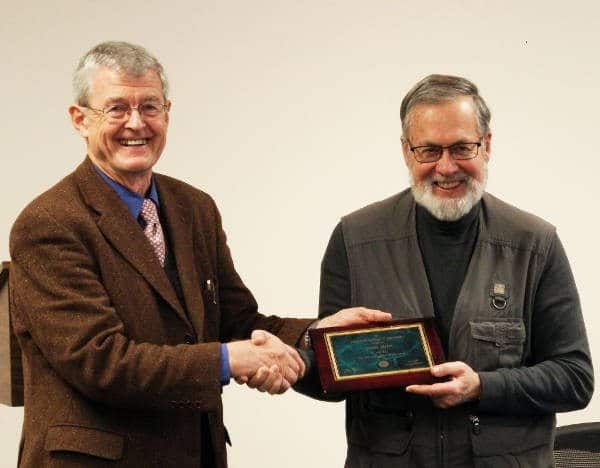 Former Alberta Agriculture and Forestry researcher Jim Helm isÂ awarded the prestigious American Society of Agronomy Distinguished Service Award. This award is given only to highly distinguished nominees that have made a transformational contribution to the agronomy profession.

â€œJim Helm is a household name among cereal breeders and scientists worldwideâ€ says nominator John Ryan, former soil scientist with the International Centre for Agricultural Research in the Dry Areas.

Helm spent over four decades as head of research at the Field Crop Development Centre, located in Lacombe, and oversaw the release of 42 cereal cultivars bred specifically for conditions in Alberta and Western Canada, including 32 barley varieties, nine triticale varieties, and one winter wheat variety.

â€œWhile this award is primarily a credit to Jim, itâ€™s also a credit to his colleagues and the Centre here in Lacombeâ€ says Ryan.

Born and raised in Washington state, HelmÂ had the opportunity as a masterâ€™s student to work with legendary Nobel Peace Prize winner Norman Borlaug at Washington State University.

After obtaining his Ph.D from Oregon State University, Helm found his way to Alberta in 1973 to become the sole worker at the brand new provincial barley breeding program, later known as FCDC.

Under Helmâ€™s leadership, the FCDC grew from its humble beginnings into a world class cereal breeding facility, with 10 scientists and over 30 staff working in pathology, biotechnology, quality, and breeding labs. Initially focusing on feed barley, the FCDCâ€™s breeding programs have since expanded to include malt barley, spring and winter triticale, and wheat.

Helm retired from FCDC at the end of 2014.Â HeÂ has also received the Canadian Society of Agronomyâ€™s Distinguished Agronomist award, the Alberta Centennial Medal for outstanding service to the people and province of Alberta, the Alberta Science and Technology Award for Innovation in Agricultural Science, and was inducted into the Alberta Agricultural Hall of Fame in 2002.