Seek and Destroy: The Control Of Herbicide-Resistant Weeds Through Seed Destruction 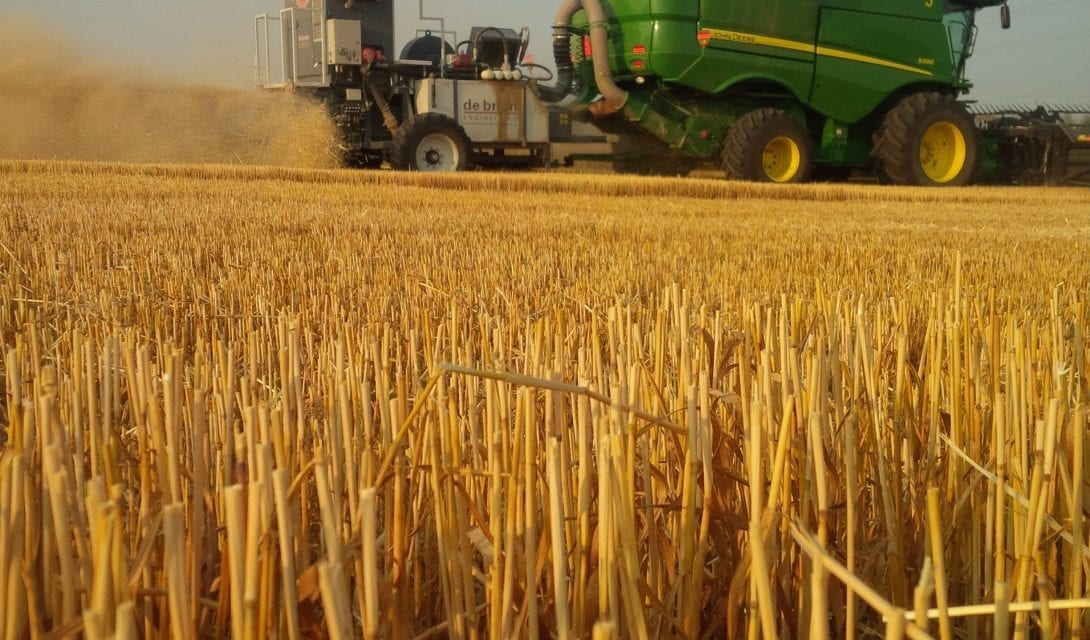 Speed of chaff movement is critical for the system to work best. (Photo: Dr. Neil Harker)

According to Breanne Tidemann, a field agronomy scientist with Agriculture and Agri-Food Canada based in Lacombe, Alta., herbicide resistance is continuing to increase in terms of how common it is, as well as how challenging it is to manage.

“With each new herbicide-resistant weed, herbicide options become more restricted. With wild oat as an example, we have biotypes on the Prairies resistant to group 1 and 2 herbicides quite commonly, but there is also resistance to group 8, 14 and 15 products. That really limits herbicide options,” she says.

Tidemann and her colleagues have been exploring other avenues of control, chiefly a machine designed to destroy weed seed at harvest. Funding for the research, which started in 2017, is being provided by the Alberta Canola Producers Commission, Alberta Wheat Commission, Saskatchewan Wheat Development Commission and the Western Grains Research Foundation.

“In my opinion, the answer to herbicide resistance isn’t another jug of chemical,” she says. “We need to use multiple methods of managing weeds, and to me, it only makes sense to start targeting the seeds. Why let surviving weeds — the ones most likely to have new resistance traits — put their seeds into the seed bank to be a problem next year? I think seed destruction could play a key role in managing herbicide-resistant weeds in the, hopefully, near future.”

Ian Epp agrees. He says in addition to reducing the total number of weed seeds entering the weed seed bank, harvest seed management is also beneficial in reducing the spread of weed species, including herbicide-resistant weeds, within a field. “Combines represent one of the best dispersal mechanisms available to weeds,” says the Saskatchewan-based agronomy specialist with the Canola Council of Canada.

“Seeds that enter the combine may be spread up to several hundred feet away from the initial mother plant, which for patchy weeds, or seeds from a newly-introduced herbicide-resistant biotype, represents an efficient method of establishing new patches and rapidly becoming a widespread field problem.”

This may result, he says, in growers using otherwise too expensive or intensive ‘patch’ management strategies to deal with, or delay, a weed problem. He firmly believes that reducing the number of seeds entering the seed bank, and/or manipulating where they enter the seed bank, are two important tools for managing an ever-changing composition of weeds in any field.

In 2017 and 2018, Tidemann and her team experimented with seed destruction in 20 producer fields in Alberta, and the trials will continue for two more years to determine the effects of this technique on surviving populations. “We took weed counts this spring, but that data isn’t summarized yet.”

She’s using the Harrington Seed Destructor (HSD), invented in Australia, a device that’s towed behind the combine and features a cage mill that crushes the chaff — and the weed seeds the chaff contains. Speed of chaff movement is critical for the system to work best, and Tidemann has also found that farmers should wait until green or tough material has had a chance to do some drying.

The tow-behind HSD model is actually no longer on the market, but the firm offers the Integrated Harrington Seed Destructor (iHSD) that mounts directly onto the combine. Australian researchers have shown that the HSD and iHSD provide similar results. There is also a competitor called the Seed Terminator.

As far as Tidemann is aware, there are no published research results about the performance of the iHSD or its competitor, but she says a number of producers are using the iHSD in Australia, and there is also one being used in Canada, north of Saskatoon. She’s heard that both of the mill systems on that unit ran into some wear issues last harvest, and that some modifications are being tried.

In order for a seed destruction system to be effective, the weed seeds obviously need to be in the chaff. Cleavers and volunteer canola work well, but chickweed seed doesn’t because it’s so close to the ground and producers don’t want to chance equipment damage by cutting at that level. Tumble weed also presents a similar issue — as does wild oat, but for a different reason.

During Tidemann’s PhD studies, she found that wild oat seems to shed its seed prior to crop harvest. “So, what we did is we compared early-maturing crops (peas followed by winter wheat) to ‘normal’ maturity crops (wheat and canola) to late-maturing crops (faba bean and flax),” she says. “We collected chaff off the plots when we harvested and counted how many wild oats we collected in each plot (which would be the ones to go through something like an HSD). We also compared swathing and straight cutting in each of those rotations. The idea was that we should collect the most wild oats in early-maturing crops, and should collect more by swathing versus straight cutting.”

Preliminary results show that more wild oat seeds are collected when crops are swathed, but Tidemann says more are not necessarily collected with earlier-maturing crops. “We still have to do a final analysis on this data to see if those preliminary results are true at all sites and years, and then we need to try and figure out why,” she says. “It’s possible that wild oats are more variable than we suspected, which makes it harder to manipulate agronomics to collect more seeds. More to come on this project in the next year or so.”

Tidemann notes that a couple of producers in the province are trialing a harvest weed seed control method called chaff lining (see sidebar) that’s less expensive than seed destructors. At this point, she doesn’t think most producers see the cost of seed destructor systems being worthwhile.Epp reports that the iHSD currently costs about $150,000 and the Seed Terminator rings in at about $100,000. However, while Tidemann states that something like chaff lining may be easier to adopt initially, a lot of the same operational principles apply in terms of, for example, seed capture/retention issues.

In terms of when seed smashers might be used on a widespread basis, Tidemann says that at least two other factors are at play besides cost of the equipment, including her research results and the rate of spread of herbicide resistance. “I hope over the next few years we start seeing interested producers. I hope to do some more exploration into what’s going on with wild oat seed retention, and also look forward to trialing something like chaff lining.”

An enjoyable part of Tidemann’s work is seeing producers get interested in ways of solving problems like weed control. “They have so many ideas and so many different perspectives about what will work on their farm and why,” she says. “I love hearing from them and hearing what they’re thinking about trying.”

Chaff lining is the practice of concentrating chaff in a narrow row between stubble rows directly behind the harvester. An August 2018 University of Western Australia report states that use of chaff lining has risen rapidly in that country over the last two years. “A survey of WeedSmart subscribers,” states the report, “shows the percentage of growers using chaff lining increased from 6% in 2016 to 26% in 2017.”WeedSmart is an industry-led initiative to enhance on-farm practices and promote the long-term sustainability of herbicide use.

Recent studiesheaded by Annie Ruttledge, from the Department of Agriculture and Fisheries in Toowoomba, Australia, show that use of chaff lining or chaff tramlining — when chaff material is concentrated on dedicated tramlines in controlled traffic farming systems — does concentrate weed seeds into a narrow area, and that heavy layers of chaff lead to better suppression of weed emergence.

“Small seeded broadleaf weeds, for example common sow thistle, are more easily suppressed than grass weeds with larger seeds, such as annual ryegrass. Thick tramlines and chaff lines reduce, but do not prevent, weed emergence, so other measures may be needed to control weeds in tramlines/chaff lines, for example, spraying the tramlines with a shielded sprayer,” says Ruttledge.