Snow On Canola: What To Do? 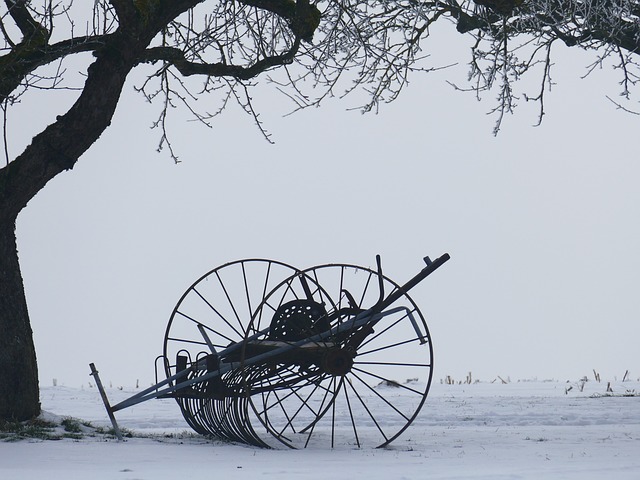 Common scenarios growers face with the snow on canola are:

Here is a description of each scenario, along with some tips to help with decision making:

1. Canola is immature when snow falls. If frost is light and the forecast shows a return to warmer seasonal temperatures, you may be better off leaving the crop standing so it can mature longer. Cutting too early (before 60% seed colour change on the main stem and before all seeds on side branches are firm to roll) guarantees a yield loss. Canola can usually withstand a light frost, but keep an eye on it for a few days to make sure pods and pedicels remain sound.

Frost (whether snowing or not) locks in green permanently, but snow does not necessarily mean temperatures were low enough to create this permanent green. Rain can turn to snow at temperatures right around 0°C, and canola can usually tolerate temperatures of 0°C or -1°C without any ill effects. Also remember that moisture often reduces frost damage, and snow counts as moisture.

Windrows may provide a little bit of protection from subsequent frosts, especially for pods inside the windrow, but if light frosts are forecast before the weather turns warm again, the more profitable option may be to leave the crop (although this requires some trust in forecasts.)

Another factor is that canola swathed green takes a lot longer to cure than canola swathed at 50-60% seed colour change. Whether growers swath a green crop now or wait a week, combining will likely occur around the same time. And by cutting early, the crop may not meet its yield and quality potential.

Click here for more tips on swath timing and frost.

2. Canola is ready to swath when snow falls. This crop is mature, so frost at this stage will not hurt yield. Heavier frost will however stop the green-clearing enzymes, and green may be locked in permanently. This can’t be helped, but because the crop is mature, most seeds will be at a moisture content below where this is a significant risk. Start swathing as soon as you can. Moisture from falling snow would be just like a light rain, which can keep mature pods from shattering while swathing. If snow is heavy but warm conditions will follow soon, it may be wise to delay the swathing until conditions warm up. Otherwise snow trapped in the swath may take longer to melt away than it would if you left it standing through the snowfall period.

Should you swath? If (and only if) frost hits before a standing crop is fully matured, swathing may give the crop time to cure and rescue more yield in the process. But if the crop is mature and will be ready to harvest as soon as it dries, swathing is not recommended. This will not be an easy crop to swath, potentially resulting in a poorly laid down windrow. The material will also be light and fluffy making it very prone to blowing. These flattened crops won’t be easy to straight combine either, but adding in another operation could only amplify the frustration.

Straight combining tips for canola flattened by snow: Mature canola fields flattened by snow are unlikely to spring back. If they’re still flat, they’ll be staying flat. There is no easy way to harvest this crop, but these tips may help:

4. Canola in the swath was already dry and has been hit with snow. This can be treated similar to a rain event. With warm and dry days, that swath will dry down and can be combined as usual. The concern for many is whether a return to seasonal weather will occur, or if winter is here to stay. We have to assume that in mid-October, there is good weather still to come. Attempting to pick up a swath with snow on it comes with challenges. First of all, with cooler temperatures, a plan for drying must be in place as the air won’t have the capacity to dry with natural air drying (NAD). The combine operation itself may not even be possible. If temperatures aren’t cold enough, the snow trapped in the swath will melt as it heats up inside the combine, creating issues like iced up sieves and a gunky mess in the grain tank. The goal for combining with snow is to have the majority of the snow blow out the back of the machine, which means temperatures need to be sufficiently cold.