Stay Vigilant When it Comes to Clubroot Management 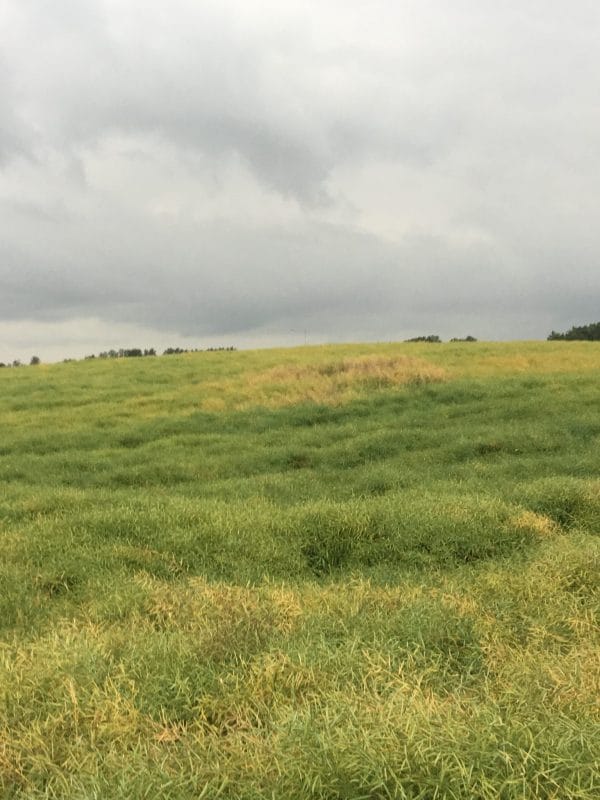 Across Alberta, cases of clubroot are on the rise — even in once clubroot-free areas in southern Alberta. The Canola Council of Canada offers solid advice for those who have clubroot, and those who don’t want it. And research at the national level and at the University of Alberta provides new insights on pathotypes and creates new methods of detection.

In 2018, researchers from Alberta Agriculture and Forestry and the University of Alberta surveyed 543 canola crops for clubroot occurrence and spread. The surveys resulted in 79 newly recorded cases of the disease. County and municipal personnel identified another 221 cases, bringing the total of new cases for 2018 to 300 and the grand total to 3,044 confirmed cases since 2003. While the outbreak is still most severe in central Alberta, the disease continues to spread in the Peace Country and in southern Alberta, albeit more slowly.

Results for 2019 surveys continue to come in. At the time of this report, many regions were still under surveillance.

The first cases of clubroot appeared in Rocky View County, a municipality that surrounds Calgary in southern Alberta, in 2018. Jeff Fleischer, manager of Agricultural and Environmental Services for Rocky View County, oversees services like weed and pest control, and inspections and surveys. His department is responsible for the countywide clubroot survey, an area that covers nearly one million acres. This year, students hired on as crop inspectors surveyed about 350 canola fields, each about 160 acres in size.

Surveying, which started in May and wrapped up in October, involves inspecting plant roots at the main approach of each field. Last year, crop inspectors found four new cases of clubroot in Rocky View County. That number may have risen to five as of this year.

“We’re about halfway through our survey for this year, and we do have one potential new case,” said Fleischer. “We’re just waiting for lab results.”

These numbers are not alarming when compared to the region around Edmonton where there are hundreds of infected fields. What is alarming is last year was the first time they found cases in this region, which indicates further spread in southern Alberta.

“If we don’t happen to find clubroot in the approach, it doesn’t necessarily mean that it’s clubroot-free, but in most cases that’s the main location where clubroot is found,” said Fleischer.

Clubroot is a named pest under the Agricultural Pest Control Act of Alberta, which means growers are issued a notice when new cases arise. Once clubroot is found in an approach, crop inspectors will return to examine the field more thoroughly. At that point, the municipal government will begin to work closely with affected farmers, teaching them how to manage the problem and reduce the risk of spread. They teach farmers how to disinfect equipment in order to limit soil transfer from one field to another, and discuss the merits of extending rotation to limit the host crop’s ability to produce new spores. They also advise growers on new clubroot-resistant varieties.

“We do restrict the growing of canola for three years if we find clubroot in a canola field,” said Fleischer.

Fleischer reminds growers that clubroot spores will still be present in infected fields even when they are not in canola production. And spores in the soil can be carried on equipment going in and out of the field.

“Just because there are no visible symptoms on wheat and barley, doesn’t mean you’re not going to transfer spores from that infected field to another canola field, where you’re going to spread the disease,” said Fleischer.

Since soil can be transferred via wind and water, Fleischer recommends leaving soil covered to further stop spread.

Weed control also plays an important role in spread as well. Brassicaceae family weeds, like stinkweed, flixweed, wild mustard, volunteer canola and shepherd’s purse, act as vectors as well and can aid in spore reproduction. If there is no host crop, then the spores will just die out, but that could take up to 20 years, said Fleischer.

Dan Orchard is the Canola Council of Canada’s lead contact on clubroot. He echoes Fleischer’s advice saying that it is important to make sure no outside soil is introduced to the farm.

“Some of the means of clubroot transmission could be hard to control, and maybe impossible, but doing all you can to reduce the chances of contaminated soil entering your land is critical,” he said.

The Canola Council of Canada is still working on a clubroot “recipe.” The idea, said Orchard, is if the recipe is followed then the desired result is likely. If ingredients are left out, however, the desired result will not be achieved.

The basic recipe is as follows:

“Spore numbers seem to be the key,” said Orchard. “Keeping spore loads low and local is a bit of a tagline.”

When a susceptible crop is grown in a clubroot-infested field the amount of spores produced is astronomical. Per plant, more than 16 billion spores could be produced. It’s an amount that Orchard says is “unmanageable.”

Clubroot spread is patchy and variable, and soil sampling isn’t reliable enough to detect its presence in some cases. Growers need to use a combination of resistant varieties and rotation as a proactive management strategy, said Orchard.

Although Clubroot Steering Committee members have discussed proper rotation of resistant varieties to avoid the development of resistance at great length, they still don’t have direct recommendations. For now, the best recommendation is to not use the same resistance source over and over, said Orchard.

“Having a good rotation and using different sources, generations, or mechanisms of resistance is the best management,” he said.

Disinfectants and a New Scouting Method

To prevent the spread from one field to the next, clubroot experts say the best management practice is to remove loose dirt, wash equipment and then apply a disinfectant. However, not all disinfectants are created equal. To determine which ones worked best, Alberta Agriculture and Forestry research scientist and plant pathologist Michael Harding spent the last two years evaluating products and methods for equipment sanitization.

Pathogen spread is caused for the most part by the movement of infected soil via equipment. Movement can be prevented by sanitization, which involves removing soil and plant debris, and then disinfecting with a chemical that will kill the resting spores of the clubroot pathogen. This is important between fields, as well as for contractors moving farm to farm.

In his research, Harding measured the effectiveness of 24 chemical disinfectants by exposing the spores to the chemicals at different concentrations and then testing for viability. Of the disinfectants evaluated, seven were able to kill more than 90 per cent of spores.

The most effective disinfectant was sodium hypochlorite (bleach), which killed nearly 100 per cent of the resting spores at concentrations above 1.7 per cent.

The second most effective disinfectant was “Spray Nine,” which killed almost 100 per cent of the resting spores. The third most effective products were chlorinated degreasers called Adhere NC and Premise Degreaser. They killed more than 95 per cent of spores at product concentrations of approximately 10 per cent.

Additional details can be found in a sanitization fact sheet found on the Alberta Agriculture website.

Harding is just wrapping up a second project, funded by Alberta CAP dollars, which looked at whether or not dogs could be trained to detect clubroot in crops without pulling up plants. He worked in partnership with Ken Coles of Farming Smarter and a New Brunswick-based trainer. Four dogs, including a Black Labrador, a German Shepherd and a rescued Golden Doodle, were trained to detect clubroot and then trialed in Alberta canola crops.

“That project has been quite successful in the fact that we’ve shown dogs definitely can be trained to detect clubroot,” said Harding.

“We don’t know yet if this is going to have any real impact on the industry,” he continued. “We’ll have to wait and see if somebody’s willing to do the adaptive research. We’ve proven that it can be done, but the dogs were quite novice.”

Harding isn’t the only one doing clubroot-related research. Steve Strelkov, professor of plant pathology at the University of Alberta, is probably the province’s foremost researcher on clubroot. He and his team are working on four separate projects at the moment.

First, they have been leading research to identify the pathotypes (strains) of P. brassicae. This information is important for understanding how different sources of host resistance could perform.

“We have identified ‘new’ pathotypes that can overcome host resistance in canola, and have been tracking the emergence of these new strains,” said Strelkov. “We have also worked with Michael Harding with AAF and many of the counties and municipalities to track the spread of the disease.”

Furthermore, Strelkov and his team are leading research into the development of a molecular assay to detect P. brassicaepathotypes from plant and soil samples.

On top of that, Strelkov is working on a project that looks at the possibility of pH-insensitive strains of the pathogen.

“While P. brassicae tends to favour lower pH/acidic soils, there are some cases in which moderate or even severe clubroot can develop at higher pHs,” he explained. “We are investigating whether this is due to strains that are not as sensitive to pH.”

Finally, working in collaboration with colleague Sheau-Fang Hwang at the University of Alberta, Strelkov is leading work on several strategies to manage the clubroot pathogen, including soil liming. They also have a PhD student working to develop a yield loss model for clubroot.

Save the date for the Peace Region Clubroot Response Workshop on Wednesday, Jan. 8, 2020, in Grande Prairie, Alta.

The clubroot response workshop will feature all aspects of clubroot in canola including:

This workshop is based on the success of the 2019 Southern Alberta Clubroot Response Workshop, which attracted more than 200 attendees — many of which considered it the best clubroot meeting they have attended.