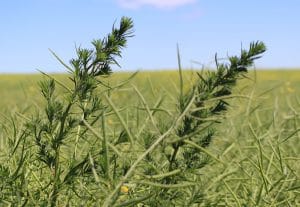 Kochia stands above the canola canopy. You might want to check them for glyphosate resistance. Source: Ian Epp

Glyphosate-resistant kochia is found in all three Prairie provinces. Kochia produces 15,000 to 25,000 seeds per plant, and mature weeds, once they break from their stems and start to tumble with the wind, can spread these seeds over a fairly wide area. Farmers will want to test escapes for glyphosate resistance so the weeds can be targeted for intense management before they start to shed their seeds. A few hours of hand rouging may be required, but this can be time well spent to stop a small patches from spreading.

Kochia patches are hard to remove, even if kochia is not glyphosate resistant. The weed often takes over saline or otherwise marginal areas where crop barely grows anyway. Farmers may want to consider seeding kochia-infested areas to salt-tolerant perennial forage rather than continue to throw inputs at it. Soil-applied residual herbicides, used ahead of some (non canola) rotational crops, can be effective on kochia, including glyphosate-resistant kochia

– Manitoba’s PSI Lab will test kochia for glyphosate resistance. It uses a DNA test to check for the GR trait, so it can test green plant material. Read the test protocols. For sampling tips, see this video from Manitoba Agriculture weed specialist Tammy Jones. Manitoba Canola Growers can get a free test.

– Charles Geddes, AAFC Lethbridge, is with the Prairie Herbicide Resistance Research Lab. The lab is also accepting samples from suspicious kochia patches for evaluation. They will test for glyphosate resistance and also dicamba/fluroxypyr resistance, which, Geddes says, “will be a very big issue especially for pulses and small grain cereals, leaving minimal herbicide options post-emergence.” Sampling protocols require leaving at least 20 plants until October and then harvesting at least 2,000 viable seeds. Email [email protected] for more information. Below is a PDF of the submission form and sampling protocols.