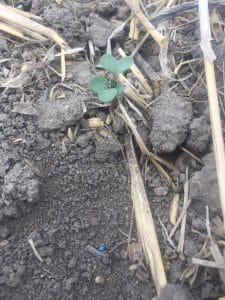 Here is the Top 10 list of agronomy challenges from 2018, compiled by the Canola Council of Canada agronomy team. Every canola grower from across the Canadian Prairies probably experienced a few of these challenges throughout the season. Some might have endured all of them.

1. Poor emergence. Very dry spring soil conditions, particularly in southern regions of the Prairies, and not much rain led to delayed and uneven emergence. Some farmers seeded deeper to chase moisture, which may have had some plants emerging earlier but didn’t help with uneven emergence. Dry conditions can also increase damage from seed-placed fertilizer and, if conditions stretch back to the summer before, increase herbicide-carryover issues. Slow emergence and slow growth increased the intensity of flea beetle pressure, partly because slow-growing plants are susceptible for that much longer and partly because slow emerging plants meant more flea beetles were coming out of hibernation before the crop was past the most vulnerable stage. Despite all this, when planning for 2019, the probability for high yields is still improved with early seeding.

2. Hit and miss rainfall. Scattered showers were the most common source of in-season precipitation. While we can’t control the weather, agronomic practices that conserve moisture, like zero or minimum tillage, helped yields in 2018.

3. Flea beetles. Leaf area loss to flea beetles was high in some fields, for the reasons noted in point 1. Seed treatments are still very effective and upgraded treatments are available for farms that seem to have a history of high flea beetle pressure. Beyond that, faster emerging, vigorous plants will often outgrow the at-risk period without the need for foliar insecticide. If the crop is establishing slowly, be extra alert for flea beetles. Nine steps to make the right flea beetle spray decision.

4. Clubroot. Clubroot continues to be found in new areas north, south and east of the central Alberta hotspot. We can now say that clubroot is basically all across the Prairies, which means most farms can justify clubroot-resistant varieties. Crop rotation of two years or more between canola crops does help, but for rotation to work, host weeds (volunteer canola, wild mustard, stinkweed, flixweed, shepherds purse) must also be controlled. DNA tests of soil are a good tool to identify the presence of the pathogen, but they do not replace good scouting. Other practices to reduce clubroot risk include direct seeding and reduced tillage to reduce soil movement, patch management, and continued scouting – even with resistant varieties deployed. Detailed management tips.

5. Blackleg. Incidence of blackleg found in all three Prairie Provinces ranged from 10 to 13 per cent in 2018, despite being a lower year overall for disease severity. Spring had just enough moisture to start the disease cycle. New commercially-available blackleg pathogen (L. maculans) race tests, which tell us the predominant race in the field, make variety choice easier. In addition to R-gene rotation, lengthened crop rotation (two- or three-year break) is still very effective.

6. Verticillium stripe. There seemed to be a higher incidence of verticillium stripe (VS) in 2018, potentially owing to the heat. VS disease is fairly new to Canada and more research is needed to understand the impact and how to manage it. For 2019, get to know the symptomsand take a look for the disease. Symptoms of VS are quite similar to blackleg, with blackening in the cross section. There is also straw-like shredding which is similar in appearance to sclerotinia stem rot. Wilting and striping along one side of the stem and microsclerotia is indicative of VS, and not the other common canola diseases. Read more.

7. Heat stress and smoke. It was a hot July. Missing pods and yield reductions are known to result from hot days and warm nights during flowering. Adding to the crop stress in 2018 was smoke in August. Heavy smoke from forest fires in B.C. delayed canola maturity in some areas and would have been a factor in limiting the amount of canola that was ready to combine before the September delays. It was an unusual year for smoke, so this is not something to try to manage around for 2019.

8. Delayed harvest. The cool, wet September meant that very little harvesting was done all that month. More Prairie canola crops might have been harvested in August if not for the smoke, but otherwise the weather is what it is. Was crop left standing for straight combining at higher risk throughout the September delays? That isn’t certain. While some standing crops were flattened by heavy snow and became a challenge to pick up, others not flattened often dried out and were ready to combine before the swathed crops. The result may have more farmers considering harvest aids (Reglone and Heat, for example) so they can combine standing crops a little faster once the harvest opportunity does come along. Keep in mind that these products don’t work in cool conditions.

9. Green seed. Frosts in September locked in high green for many canola seeds, particularly in the northern and western regions of Prairies. Early-season crop establishment challenges, crop-delaying hail or August smoke left a lot of immature canola vulnerable to these killing frosts. Another factor is thinner stands due to lower seeding rates. Average plants stands of 4-5 plants per square foot are capable of high yields, but maturity can be delayed compared to thicker stands with fewer later-maturing side branches. In general, an early and evenly-established crop with enough plants per square foot to shorten maturity (due to fewer later-maturing side branches) often means earlier harvest and lower green risk. Once frost locks in green, it becomes a storage and marketing challenge.

10. Storing high-moisture canola. Once good harvest days finally came in October, priority number one was to get the crop in the bin. That meant some canola came off very damp. The result was the added cost (equipment, energy, time) to dry canola and potential increased storage risk for any canola that was not 8% moisture or lower. (Questions about handling high-moisture canola.)That risk may continue to play out this winter. Check bins often.