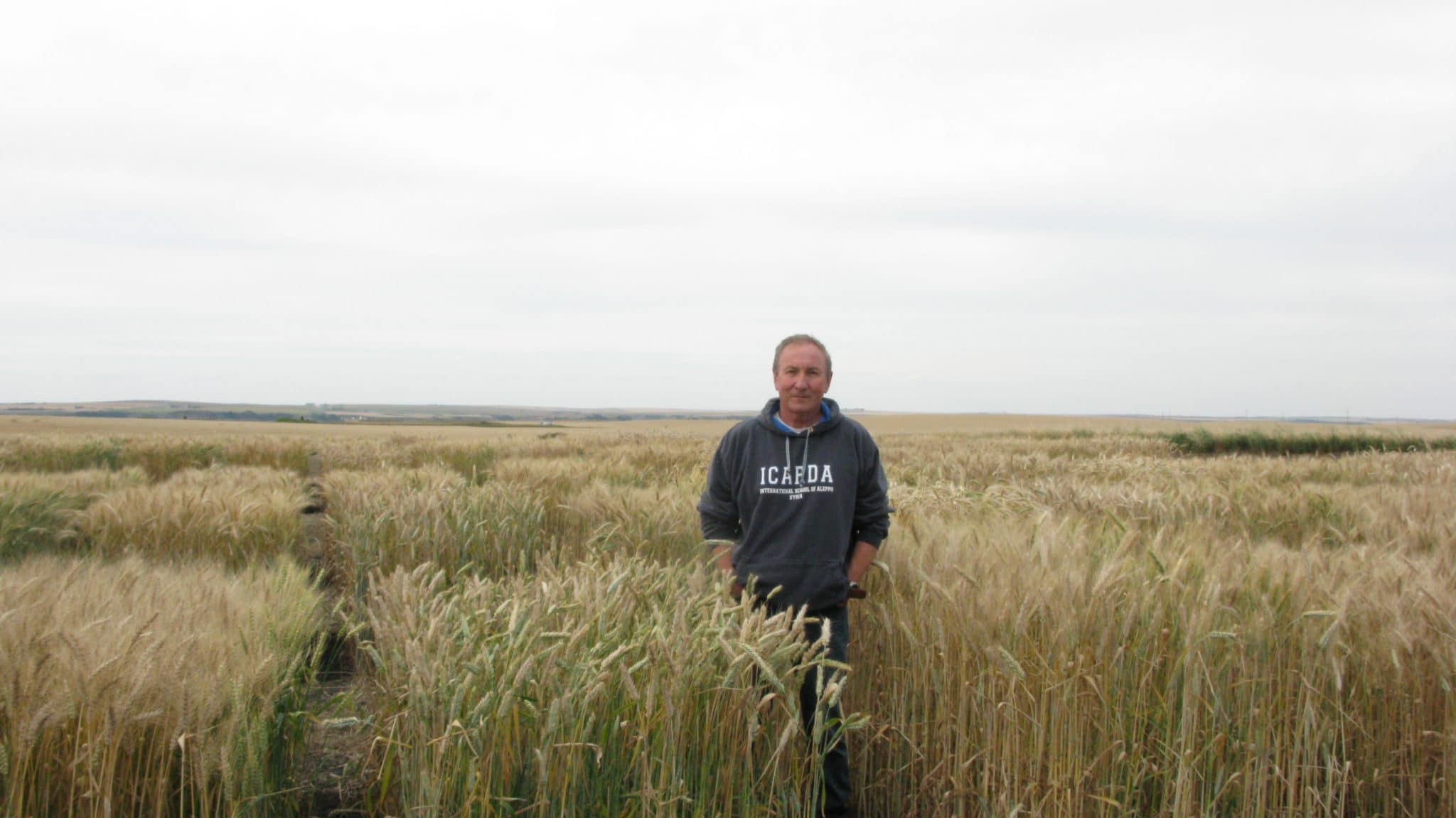 Thirty-four years into breeding wheat and triticale, Mazen Aljarrah, a researcher at Alberta Agriculture and Forestry’s Field Crop Development Centre (FCDC) in Lacombe, Alta., is as excited about the work he’s doing now as he was at the outset.

“I enjoy every moment working in this centre. As a plant breeder, you have a hope and a dream every year that you’re going to get a super variety next year. When you go through the advanced material and you see the babies, you always hope that one day we’ll get one variety that is perfect: that will satisfy all of a farmer’s needs. Will that happen? Maybe not, but every year we’re making progress in a good way that adds value.”

Progress, indeed. Over the last three years, Aljarrah has released three new winter triticale varieties to the market. The real excitement — and, for the past five years, exclusive emphasis — of his breeding program today, however, is in the spring varieties.

Since 2018, Aljarrah has released four new spring triticale varieties. More are coming soon. Much more important than numbers, however, is the quality of the new lines.

“When I meet with farmers and livestock producers, I say: don’t ever judge triticale by old triticale varieties,” he says. “Try the new ones and then let me know. It’s not the same crop as it used to be.”

Given Alberta’s strong livestock sector, Aljarrah’s priority with triticale is to continuously improve the crop’s forage traits. In addition to dry matter and forage yield, Aljarrah is focusing on a host of forage attributes including digestibility, lodging resistance, reduced awn and disease resistance.

“I’m not worried about productivity in triticale. Our new varieties produce at least 15 per cent higher than barley. They’re pretty similar to oats, which used to be No. 1 for productivity. My challenge is to enhance the other features to make triticale a top forage crop,” he says.

Currently, triticale ranks between barley and oats for digestibility. Aljarrah hopes to bring triticale’s digestibility closer to that of top-ranking barley. Already, his newest varieties show a significant jump in the right direction. In order to improve digestibility further, Aljarrah is reshaping the crop, a move that also tackles triticale’s tendency to lodge.

“Usually the reason triticale has lower digestibility than barley is because it has a high quantity of lignin, mainly in the stem. What I’m doing is reshaping triticale to have shorter stems but bigger and more fertile heads. The heads of the new varieties contribute 45 per cent of biomass during cutting compared to maybe only 30 per cent. The change maintains good biomass yield but improves the forage quality and achieves much better lodging resistance.”

Meanwhile, he is also striving to improve the smoothness of triticale’s traditionally rough awns and increase both ergot and fusarium head blight (FHB) resistance.

“All the lines we registered this year and last year have very low ergot infection compared to checks. Many farmers believe all triticale gets ergot, but that is not the case.”

While FHB is not province-wide, infection levels are on the rise. There’s little question that FHB will be an increasing concern in Alberta in the future.

“FHB is something we really have to pay attention to,” says Aljarrah. “Triticale is sensitive to FHB so we are trying to increase FHB resistance level in our genotypes. Most of the lines we’ve developed have an MS [moderate susceptible] rating, which is acceptable. However, the last variety we developed — one called T267 — may be the very first line of triticale available with moderate FHB resistance.”

Unfortunately, he says, breeding for FHB resistance is very difficult because he does not have FHB resistant resources in his triticale germplasm. Compounding that issue is the fact he can’t easily borrow outside germplasm as he might with a crop like wheat because few centres breed triticale anywhere in the world, and most of those that do are private sector. In fact, the FCDC in Lacombe is currently the only research station with a spring triticale breeding program anywhere in Canada.

He’s working to solve the challenge of germplasm development through creative means.

“Triticale is crossable with wheat, and then I can cross back or top cross to triticale. It’s a long process but it can work to bring more good traits from wheat to triticale,” he says.

One such trait he’s hoping to breed in from wheat is enhanced ergot resistance, given that wheat is much less susceptible to ergot than triticale. He also hopes to increase grain quality (specifically, reduce grain shrivelling) by transferring wheat genetics.

Several years ago, Aljarrah also started making crosses between winter and spring triticale, given that they have entirely different genetic backgrounds. Already, he has some populations at the yield trial stage.

“There is a big change in the interest level and more is coming. During the International Triticale Symposium in Lethbridge last July, we met with U.S. producers and buyers who showed huge interest in our triticale.”

Currently, the market is exclusively oriented towards forage and green feeding. Aljarrah believes huge potential lies ahead in another direction: biofuel.

“The complaint is there’s not enough production of triticale for grain. They use wheat for ethanol production right now, but triticale is much more efficient than wheat. There is a huge market coming up for triticale for biofuel; we’re just not there yet. I’d say maybe five years from now.”

“Our plan is to put in the market different genotypes and phenotypes that fit different markets. Most of our lines are dual purpose, so they go well for grain or forage production,” he says.

A real challenge for Aljarrah’s program is maintaining funding. Because triticale remains a minor crop in Western Canada, and likely also because it is primarily a forage crop, funding agencies show little interest.

“My hope is that maybe there is an opportunity for groups like Alberta Beef Producers to continue helping provide funding to enhance barley and triticale for forage use, like they have done in the past.”

“For many years, I collected wheat because it helped me enhance triticale. Later, we found out that our germplasm for spring wheat was very good, so the decision was made to also focus on spring wheat,” he says.

So far, he has three lines in cooperative trials: a Canadian Prairie Spring (CPS), a Canadian Northern Hard Red (CNHR), plus a very high-yielding special purpose wheat that he hopes to release in February 2020.

Unlike triticale, many researchers representing both public research programs and private companies are actively involved in spring wheat research. Aljarrah is very pleased that much of his work on spring wheat is conducted in collaboration with colleagues from Agriculture and Agri-Food Canada and companies like Syngenta and Limagrain Cereals Research Canada.

“We are swapping trials because having more locations in Western Canada is very critical to success. And, we are working with private companies to evaluate our germplasm for quality,” he says. “The main challenge in our wheat breeding program is finding a place I can evaluate a lot of material for FHB. So far, we don’t have that in Alberta, but Syngenta has a site in Rosebank. That is an example of why collaboration is so important.”

In addition to screening for FHB, Aljarrah’s main priority in CPS is milling quality.

“We have a long history of breeding both winter and spring triticale, so I’m confident we can achieve excellent improvements in wheat too. We have approached a good level for germplasm, so from now on we will have great varieties coming from our program.”

While Aljarrah’s entire career to date has focused on wheat and triticale, his work hasn’t always been based in Canada. Aljarrah was born and raised in Syria and spent the first 22 years (1985-2007) of his career based primarily out of the International Centre for Agricultural Research in the Dry Areas (ICARDA) based in Aleppo, Syria. His earliest research priorities included screening durum wheat for drought resistance and multiple disease resistances (stripe, stem and leaf rust, among others). Over the last 12 years of his career in Syria, he shifted primarily from durum to winter wheat (as well as some work with triticale), furthering his skills with collaborative projects in Turkey and with the International Maize and Wheat Improvement Center (CIMMYT) in Mexico.

Unlike the many Syrians who have been forced to leave their country because of war, Aljarrah immigrated to Canada in 2008 entirely by choice.

“Back then, Syria was great on the political side. There were no problems and no war. I didn’t need to leave. But during my whole time with ICARDA, it was always one of my dreams to work on wheat breeding in Canada. I always had a huge poster in my office in Aleppo of the wheat fields on the Canadian Prairies: that’s where I wanted to be.”

In 2008, Aljarrah, together with wife, Zuka, and two sons, left Syria for Canada with great hopes of finally fulfilling his dream.

“I still remember the interview I had at the Canadian embassy. They asked me what province I’d like to choose and I was allowed to pick two. I said, ‘Alberta and Saskatchewan.’ They asked me why I’d pick those two [because] B.C. is warmer. I said, ‘I don’t mind! Over there is the wheat!’”

END_OF_DOCUMENT_TOKEN_TO_BE_REPLACED 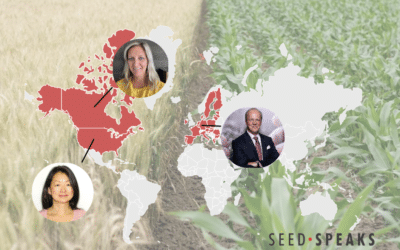 With the potential to cut breeding time in half, gene editing and other new breeding technologies prove the sky is the...

END_OF_DOCUMENT_TOKEN_TO_BE_REPLACED 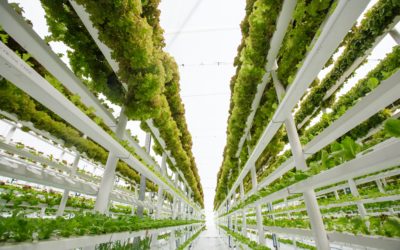 As you look to the future of vegetable growing, look up, not out. Vertical farms are taking urban centers by storm, and...