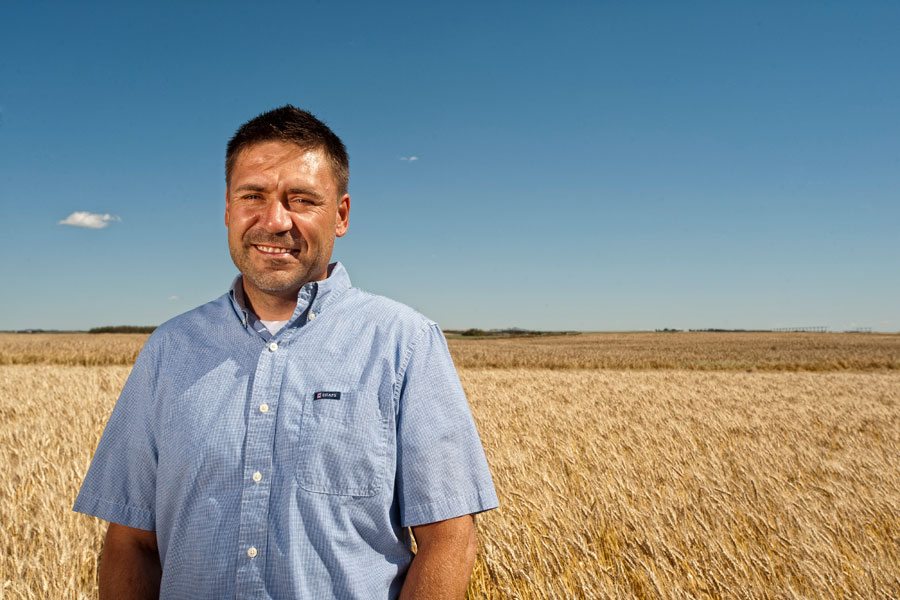 An international consortium of scientists co-led by the University of Saskatchewan has been able to crack the code for understanding the order of about 90 per cent of the highly complex genome of bread wheat, the most widely grown cereal in the world.

â€œThis new wheat genome sequence is an important contribution to understanding the genetic blueprint of one of the worldâ€™s most important crops,â€ said Curtis Pozniak, a plant scientist with the U of S Crop Development Centre in the College of Agriculture and Bioresources. â€œIt will provide wheat researchers with an exciting new resource to identify the most influential genes for wheat adaptation, stress response, pest resistance and improved yield.â€

A combination of advanced software, computer programming and bioinformatics tools enabled the International Wheat Genome Sequencing Consortium (IWGSC) to use existing sequencing technologies to look at virtually the entire wheat genome. This will complement existing IWGSC strategies that are studying one chromosome at a time.

The consortium expects to have the complete picture of the wheat genome puzzle (17 billion base pairs)â€”with a clear idea of how the genes are orderedâ€”within two yearsâ€™ time. Given that the wheat genome is five times the size of the human genome, previous estimates suggested this work would take four or five more years.

â€œThe computational tools developed by NRGene, which use Illuminaâ€™s sequence data, Â combined with the sequencing expertise of IWGSC has generated a version of the wheat genome sequence that is better ordered than anything we have seen to date.Â  We are starting to get a better idea of the complex puzzle that is the wheat genome,â€ said Pozniak.

The result will be much greater precision in the breeding process.

â€œImagine that you have a blueprint for the order of important pieces of the wheat genome puzzle. With that information, it becomes far easier to assemble the puzzle more quickly into new and improved varieties,â€ said Pozniak. â€œBut this sequence is just the first step. There is still much work to do to define the function of each of the genetic pieces so that breeders can identify the very best genes in the gene pool.â€

Though the work was done on just one variety of bread wheat (Chinese Spring), the new knowledge will serve as the backbone to unlock the genetic blueprint for traits in other varieties as well, significantly accelerating global research into crop improvement, he said.

Nils Stein of IPK Gatersleben in Germany said the new sequence represents â€œa major breakthroughâ€ for the consortiumâ€™s efforts to deliver an ordered sequence for each of the 21 bread wheat chromosomes.

The public-private collaborative project is co-led by Stein, Pozniak, Andrew Sharpe of the Global Institute for Food Security at the U of S, and Jesse Poland of Kansas State University. Other project participants include Tel Aviv University in Israel and the French National Institute for Agricultural Research.

IWGSC Executive Director Kellye Eversole said the preliminary results are impressive and will complement existing genomic information the consortium has gathered over the past decade. Making available the ordered sequence for each wheat chromosome that precisely locates genes and genetic markers along the chromosomes will provide invaluable tools for wheat breeders, she said.

Results of this new approach will be presented at workshops at the Plant and Animal Genome Conference taking place in San Diego from Jan. 9 to 13. All data will be available in theÂ IWGSC wheat sequence repository at URGI-INRA.

Wheat is the staple food for more than a third of the global human population. As the global population grows, so too does its dependence on wheat. To meet future demands of a projected world population of 9.6 billion by 2050, wheat productivity needs to increase by 1.6 per cent each year. Saskatchewan supplies 10 per cent of the worldâ€™s total exported wheat and is Canadaâ€™s most important grain-producing region.