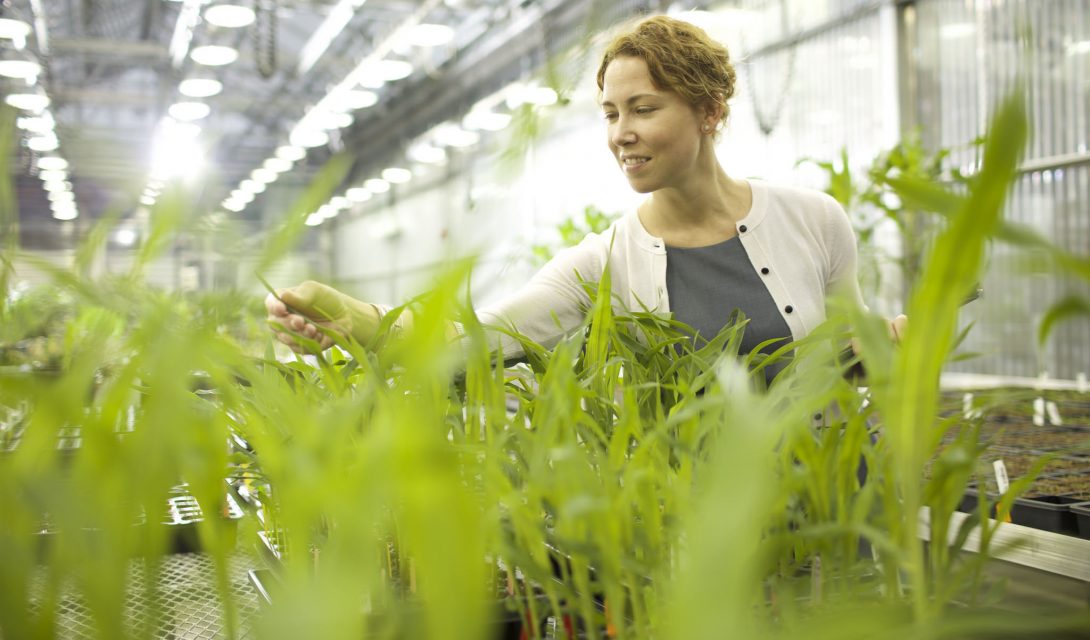 Solving the world’s food, feed and bioenergy challenges requires integration of multiple approaches and diverse skills. Andrea Eveland, Ph.D., assistant member at the Donald Danforth Plant Science Center, and her team identified a genetic mechanism that controls developmental traits related to grain production in cereals. The work was performed in Setaria viridis, an emerging model system for grasses that is closely related to economically important cereal crops and bioenergy feed stocks such as maize, sorghum, switchgrass and sugarcane.

The Eveland laboratory’s research findings, “Brassinosteroids modulate meristem fate and differentiation of unique inflorescence morphology in Setaria viridis”, were recently published in the journal The Plant Cell. In their study, Yang et al. mapped a genetic locus in the S. viridis genome that controls growth of sterile branches called bristles, which are produced on the grain-bearing inflorescences of some grass species. Their research revealed that these sterile bristles are initially programmed to be spikelets; grass-specific structures that produce flowers and grain. Eveland’s work showed that conversion of a spikelet to a bristle is determined early in inflorescence development and regulated by a class of plant hormones called brassinosteroids (BRs), which modulate a range of physiological processes in plant growth, development and immunity. In addition to converting a sterile structure to a seed-bearing one, the research also showed that localized disruption of BR synthesis can lead to production of two flowers per spikelet rather than the single one that typically forms. These BR-dependent phenotypes therefore represent two potential avenues for enhancing grain production in millets, including subsistence crops in many developing countries that remain largely untapped for genetic improvement.

“This work is a great demonstration of how Setaria viridis can be leveraged to gain fundamental insights into the mechanisms that govern seed production in the grasses – our most important group of plants that includes corn, sorghum, rice, wheat and barley,” said Thomas Brutnell, Ph.D., Director of the Enterprise Institute for Renewable Fuels, Danforth Center. “It’s also worth noting that this project was conceived and work initiated after Dr. Eveland joined the Danforth Center – an impressive feat for a junior faculty member that speaks to both the advantages of working on a model system and the great team that she has assembled at the Danforth Center.”

At the Danforth Center, Eveland’s research focuses on the developmental mechanisms that control plant architecture traits in cereal crops. Specifically, she investigates how plant organs are formed from stem cells, and how variation in the underlying gene regulatory networks can precisely modulate plant form. Her team integrates both computational and experimental approaches to explore how perturbations to these gene networks can alter morphology, both within a species and across the grasses, with the ultimate goal of defining targets for improving grain yield in cereals.

“The genetics and genomics tools that are emerging for Setaria enable more rapid dissection of molecular pathways such as this one, and allow us to manipulate them directly in a system that is closely related to the food crops we aim to improve,” said Eveland. “It means we are just that much closer to designing and deploying optimal architectures for cereal crops. The prospect of leveraging these findings for improvement of related grasses that are also orphan crop species, such as pearl and foxtail millets, is especially exciting.”