Alberta is in the midst of an almost billion dollar irrigation system modernization project.

For more than a century, southern Alberta’s irrigation system has kept crops growing no matter the weather. Over the years, the irrigation districts have updated their systems to keep them running. However, now through a new partnership with the province, the irrigation infrastructure is undergoing a massive update.

“Irrigation is in the fabric of southern Alberta. And this just helps us manage a really important resource in a very effective and responsible way,” David Westwood, general manager of the St. Mary River Irrigation District (SMRID), explains in a phone interview. “Our whole mandate —through when we expand and want to be able to add acres to southern Alberta — will be that we’re doing it with the same or even less water than we have been currently using.”

There are 13 irrigation districts within Alberta, mainly concentrated in the southern part of the province, covering 1.5 million acres with 42 storage reservoirs. A report from the Alberta Irrigation Districts Association published in November 2021 titled the Economic Value of Alberta’s Irrigation Districts, found that between 2011 to 2018, irrigation from the area annually generated $5.4 billion to provincial GDP, $3.2 billion in labour income and supported about 46,000 full-time jobs.

It was also found irrigation district land represent only 4.4 per cent of Alberta’s cultivated land base but generate 27 per cent of the province’s total primary agricultural sales and contribute 28 per cent to Alberta’s total agri-food GDP. The study also examined the impact of irrigation infrastructure funding on government revenues. It was found that for every dollar invested by the Alberta government on irrigation district related activities added $3.56 in revenue to the provincial government.

In the spring of 2020, the Alberta government put out a call for stimulus project ideas. At the time, irrigation districts in the province had been planning various upgrades to their systems, but when they saw the callout they realized they could complete their projects with government support on a shorter timeline.

“The districts were asked to submit projects they could do. We were given the guidelines of shovel ready or near shovel ready — (projects) that we could start doing fairly quickly. A lot of our districts had these projects on the drawing board,” Westwood explains.

In November 2021, another $117.7 million was invested by the provincial government and CIB. A news release from the government said the increased investment has the potential to expand irrigation by up to 230,000 acres.

The modernization project started last year, with the pipeline projects scheduled to be complete by the summer of 2025 and reservoir projects by the spring of 2028. According to Westwood every irrigation district has started on their projects, with some further along than others. Some are in the planning stages while others finished their projects by Christmas 2021.

In Westwood’s own irrigation district, SMRID, they are working on a pipeline project that had originally been designed 15 years ago but was shelved due to challenges receiving approvals and agreements with landowners for construction. 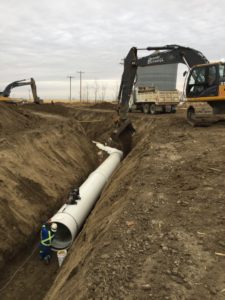 “I know, talking personally to some of those impacted irrigators on that particular project, they are very excited that they’re finally getting a pipeline. Their old conveyance channels were one of the oldest ones that we had in the district, and were dirt conveyance in some cases,” he says.

The irrigation modernization project means what is already an extremely diversified growing region can become even more diversified, Trevor Lewington, the CEO of Economic Development Lethbridge, which is located in the irrigation region, says.

“It adds new storage capacity, so that’s good news. Expanding the Chin reservoir system means there’s more water made available,” he explains in a phone interview. “That does add more acres under irrigation, which again allows either more production of the same crops or potentially more specialized crops than we currently do today.”

Lewington says there is everything from haskap berries to mustard seed grown which is then ready to be made into wasabi and shipped overseas.

“There’s often years where we have either a bad crop of some particular commodity or there’s geopolitical pressures that impact exports,” he explains. “It’s important that we have the ability to switch crops and grow a wide range of things that are going to add most dollars to our growers.”

The expansion also helps with the threats of future droughts. Glen Logan runs Wheatcrest Farms, a pedigreed seed farm near Lomond, Alta., and is on the board of the Bow River Irrigation District. He has 3,500 acres of irrigated land and says he was able to get through the dry 2021 growing season with “flying colours.”

Logan says access to irrigation is critical for seed growers in southern Alberta. He also says it’s important for potato, sugar beet and vegetable farmers in the area.

“The largest cattle feeding area in Canada happens to be in southern Alberta to that depends on irrigation for forage and grain inputs, that kind of thing. So it’s relied on heavily for food security,” Logan adds.

The following piece is from our sister publication, Seed World. As part of ongoing leadership changes, on June 23, Syngenta...

END_OF_DOCUMENT_TOKEN_TO_BE_REPLACED

Alberta Innovates has launched the Agri-Food and Bioindustrial Innovation Program which allows for researchers and...

END_OF_DOCUMENT_TOKEN_TO_BE_REPLACED

The federal government is raising the interest-free portion of the Advance Payments Program will increase from $100,000 to...