Is Intercropping the Future? 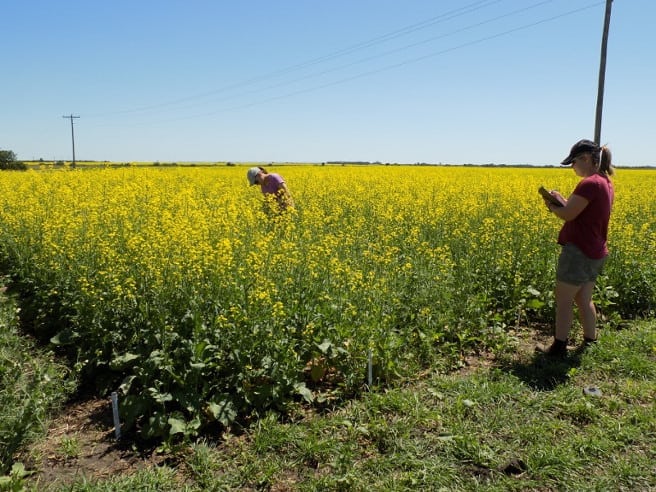 The data is in: yield boosts, lowered disease and insect pressure are just some of many benefits of planting two or more crops together.

Derek Axten started intercropping by accident in 2009, when he seeded a field of brown mustard into lentil stubble. When he harvested the field, he expected to see an overall loss. Instead, the lentil yield matched that of his other lentil fields—and he got a great load of mustard to boot.

“I thought, ‘What if we do this intentionally?’” says Axten, who together with his wife Tannis was named Saskatchewan’s Outstanding Young Farmer in 2017. “It took us until 2011 to get to an organized intercrop. Since then, we’ve always seen a net benefit.”

On their land near Minton and Milestone, Sask., the Axtens grow peas/canola, flax/chickpea, flax/lentil, lentil/mustard, and forage pea, maple pea or winter pea with mustard or canola.

In terms of land equivalency ratios, or the amount of monocropped land needed to achieve yields equal to those of an intercropped system at the same management level, the Axtens average somewhere between 1.25 and 1.3, although they have seen years over 1.5, says Axten. In 2017, some of their intercropped fields were a wash. “But averaging with the other years we’re still ahead of the game,” he says.

This is in part owing to the fact that they don’t use any nitrogen on their intercrops, because N is supplied by the pulse in each combination. Added to this, disease and insect pressure is so low on their intercropped fields that they almost never have to spray.

The year they did spray a fungicide — 2016 — “was the wettest year I’ve ever experienced,” says Axten. “All my buddies and neighbours were going on their fourth round of fungicide. You go out there and you can talk yourself into anything, so we sprayed once. But I’m definitely going to deliberate a lot more in the future.”

Axten says intercropping is an attempt to mimic what happens in a “highly functioning, highly diverse” native ecosystem, where some 120 or more species might coexist. “We’ve been growing two crops together, which is nothing like it is in a native system. But we’ve been seeing an improvement with two crops over one, and since then we’ve added clovers as companion crops.”

But intercropping is not about altruism for the Axtens: it’s a business decision. “We’ve never ever had less profit from intercropping,” he says. “And with the reduction of inputs you’re carrying so much less risk. It’s about how much money you keep as well as how much you make.”

It’s not known exactly why most intercrops see a reduction in disease and insect pressure, according to Scott Chalmers, diversification specialist for Manitoba Agriculture’s Westman Agricultural Diversification Organization (WADO). But the data is there to prove this is often the case.

Chalmers has been studying intercrop mixtures since 2009, mostly focusing on yield and nitrogen and phosphorous interactions in pea/canola (or peanola) intercrops.

Intercropping with canola has major benefits for peas: because peas, which typically fall to the ground, are held up by the canola, they experience less disease pressure and pea quality is higher. They are also much easier to harvest. “You’re not having to drag your combine knife through the ground,” says Chalmers. “It’s easier on the equipment.”

A peanola intercrop also offsets N depletion in the soil after canola. Planted alone, peas can leave a 40 lbs. of N credit in the soil; producers can expect to see about half this credit — maybe 20 lbs. N — after peanola.

But the reduction in pest and disease pressure is perhaps the most fascinating result of intercropping peas and canola.

In a 2017 study, Chalmers showed that pea crops planted alone could see 16 or more pea aphids per plant. In the peanola mixture, that figure dropped to around two to four aphids per plant — well below the economic threshold levels for spraying.

Chalmers says intercropping is best used as a pulse production system: the intercropping system actually doesn’t favour canola, but there are huge benefits for pea.

“What we tell farmers is that if you’re good at growing canola, just grow canola,” he says. “Intercropping is a more economical way of growing peas per acre. You may grow fewer peas, but because the canola is there, your net income is greater than if you grow either crop separately — you’re overyielding.”

According to Colin Rosengren, a founding member of Three Farmers, a Saskatchewan-based business that manufactures camelina oil, it’s hard to get crop insurance on intercrop mixtures.

For producers considering intercropping for the first time, Chalmers says it’s important to “start small,” and get comfortable with the process before growing whole quarters.

“Intercrops are a bit more finicky. There’s more to look after. It’s two crops on one field, which means twice the thinking power,” he says.

They’re riskier, too: according to Colin Rosengren, a founding member of Three Farmers, a Saskatchewan-based business that manufactures camelina oil, it’s hard to get crop insurance on intercrop mixtures. In Saskatchewan, producers can get specialty crop insurance on a portion of their intercrops, which guarantees producers the average on their other insured crops. But Rosengren, who intercrops perhaps three quarters of his 6,000-acre operation, says it isn’t worth it for him.

In fact, he believes most producers who intercrop do not carry crop insurance at all. It’s a catch-22 for the industry, as insurers generally won’t offer insurance until a minimum number of acres are intercropped in a province.

“Acres are very significant, but many aren’t insuring, so the numbers officially aren’t there,” says Rosengren.

In terms of harvesting and selling intercropped mixtures, Chalmers says producers might need to modify equipment or buy rotary harrows or a cleaner and will need at least two working augers. “Harvesting takes quite a bit of coordination,” he says.

Another risk is if buyers are not OK with a small amount of contamination if seed from another crop is found in a producer’s sample, Chalmers points out. “There’s no way you can clean out every canola seed in pea,” he says. “There’s always going to be half a per cent kicking around.”

In terms of agronomics, there’s both an art and a science to intercropping, and it takes keen observation and a lot of trial and error to figure out what works best.

“Peas and lentils perform better in hilltops on lighter soils, and soybeans and peas are wetter crops for us, so we change the populations to put them in the areas where they’re best suited. We’ve gained extra yield by doing so,” he explains.

Last year, Rosengren saw something extremely interesting in his barley crop, which was planted alone on a full soil profile following an intercropped mixture. Though it was a very dry year with only 2.5 inches of rain, he got the highest yields on barley he’d ever seen.

“I think there’s been more disease impact than I’ve appreciated in those particular zones, because even in the wet years when there’s moisture we haven’t seen the yields spike that high,” he says. “Why do we not normally achieve those yields? I believe it’s because of leaf diseases and sub-clinical or sub-treatment levels of diseases and stresses in a monoculture situation that’s suppressing the yield. Putting in other crops has been the best way by far to suppress the diseases, way better than fungicides.”

Rosengren runs full oil profile tests on his camelina for Three Farmers, and when intercropped, the camelina oil is of very high quality, quite apart from potential damage wrought by diseases and pests.

“This is an indication that we’re not fully capturing the potential that’s out there,” he says.

When Rosengren and his Three Farmers partners first started intercropping, they ran strip trials to compare intercropped and monocropped systems, but they soon abandoned the practice because the benefits were so obvious.

“There are a million products that offer two extra bushels of yield per acre, but that’s pretty hard to measure,” he says. “When you’re talking 25 to 30 per cent extra yield, it’s significant enough to measure. It was dramatic enough that we quit doing the strips.”

Axten also believes intercropping is the way of the future for Western Canadian farming.

“I think of all the problems that have happened in agriculture, things that have come to light in the last 15 years. We keep trying to do this monocrop thing, but I don’t think we’re showing that it works very well.”