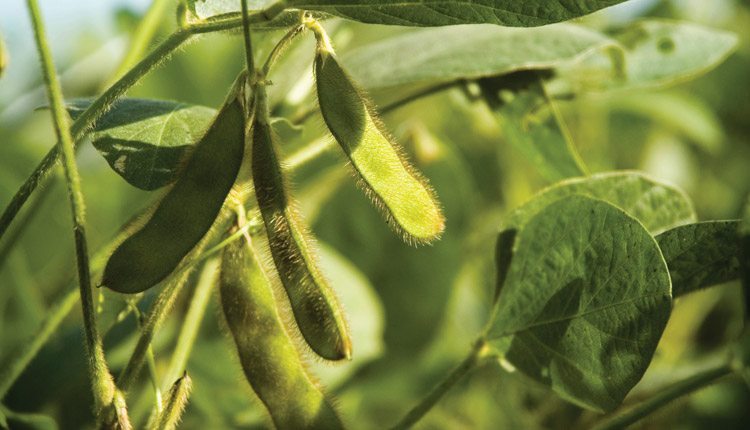 Soybeans were once unheard on the Prairies. Now, they’re marching west from Manitoba to Alberta, with no end to acreage increase in sight.

Here’s an easy riddle: What was unheard of in Manitoba a few years ago, now is found everywhere and has moved well beyond Manitoba in a seemingly unstoppable westward domination of Canadian fields?

The answer is soybeans.

Truly a force to be reckoned with, soybeans are now being grown in huge amounts across Saskatchewan and have started to be grown in Alberta as well. To find out exactly how much acreage has expanded, how the development of locally-adapted varieties is going and where the future of soybeans in the west is headed, we checked in with three experts, including Glenda Clezy, an agronomy specialist with the Saskatchewan Pulse Growers (SPG).

Clezy says it was around 2012 that the crop really started to increase significantly in acreage in Western Canada. She points to Statistics Canada data that shows a strong jump in acreage in Manitoba from last year to this year (2.3 million acres in 2017 up from about 1.6 million in 2016), and a tremendous leap over the same time period in Saskatchewan (850,000 in 2017, more than three-and-a-half times the 240,000 acres grown in 2016).

Alberta is not currently included in the data due to low acreage, nor in Statistics Canada’s June 2017 crop report, which states that Ontario, Manitoba, Quebec and Saskatchewan account for 99 per cent of national total soybean production, and that all of these provinces reached record high soybean acreages this year.

“The number of varieties available to growers is on the rise as well,” Clezy explains, “and is likely a key factor in the increase in acres as more varieties are available that are shorter-season and have the potential to reduce risk for producers. Currently there are 48 varieties in the variety trials in Saskatchewan. These varieties range from 006 to 0006 maturity groups.”

Trials in Manitoba involve similar varieties, as well as some that are later-maturing.

Clezy took a look at the websites for companies that are currently selling soybean varieties in Western Canada, and reports that there now seem to be more than 90 varieties available in total. However, she notes that not all of these varieties will be suitable for all areas, and farmers in some areas will have a much smaller number of varieties to select from that may be suitable for their locations.

Wilt Billing believes the number of soybean varieties available in Western Canada has easily gone up ten-fold over the last decade. The product line manager for Crop Production Services in Manitoba says that it’s the development of early-maturing varieties that has driven the acreage growth, and that “some companies have been faster to address this than others.”

Elroy Cober, a research scientist in the soybean breeding and genetics division at Agriculture and Agri-Food Canada (AAFC) in Ottawa, agrees that maturity is a requirement for reliable production in the Prairies. “Growers need to select lines that reliably mature,” he advises, “while recognizing they may give up a little yield in years when there is a long open fall.”

Over the last 15 years or so, Cober has been testing his early-maturing soybean lines with staff at the AAFC station in Morden, Man. He notes that while the growing season in that area is a “long” season when considering Western Canada as a whole, he’s found “the early half of my breeding material to be adapted to Manitoba.”

“During its testing, it was grown at Saskatoon for a number of years and performed very reliably there,” Cober reports. “It is necessary to test lines in their proposed area of adaptation. Iron deficiency chlorosis is not an issue in Eastern Canada, while it can be a problem with some soils in Manitoba. Local testing will sort out lines that are susceptible.”

Cober is currently testing early-maturing breeding material in Manitoba at AFFC Morden and Portage. He is also collaborating in a pilot project where he is developing populations and sending them to Morden and Saskatoon for selection and testing with the belief that local selection may allow for even better adaptation.

Billing notes that in general, breeding is now shifting towards the development of defensive traits and high-yield potential in the early-maturing varieties. He lists resistance against things like Phytophthora, white mould, and soybean cyst nematode to be among important defensive traits.

Soybeans on Trial in Alberta

In a presentation published in January 2017, crop scientist Francis Larney of AAFC Lethbridge and his colleagues stated that soybean acreage is increasing in Alberta and that they have found the best yields to occur at maturity of 116 to 121 days. They have done one year of study so far. They also conclude:

The scientists also looked into whether soybeans could be used to replace dry beans in irrigated rotations, but found dry beans result in a soil N credit 2 to 2.5 times greater than soybeans.

In terms of where in the west we might we see soybeans being grown next and how the industry is preparing for that, Clezy points to a few factors.

“The future of soybeans will be dependent on the success that growers have over the next few years, as well as the ongoing release of new varieties that offer higher yields and earlier maturity,” she says. “The weather and the amount of moisture available will also impact the success of soybeans. As varieties continue to develop that are able to mature in fewer number of days, and yield sufficiently to make them a suitable option for more of Western Canada, we will likely continue to see soybean acres increase as well as expand in geography to the north and to the west.”

Cober notes that some growers are trying soybeans in areas such as The Pas, Man., and Edmonton, and he feels it might be a possible to grow soybeans that far north, and he continues to look for new early-maturity genes which might allow for further northern expansion. “While heat-loving soybeans might be able to be grown in the northern Prairies, they need to yield enough to be competitive with cool climate crops,” he notes. “I hope that soybeans might find a place in canola rotations to allow for longer rotations and reduce canola disease pressure.”