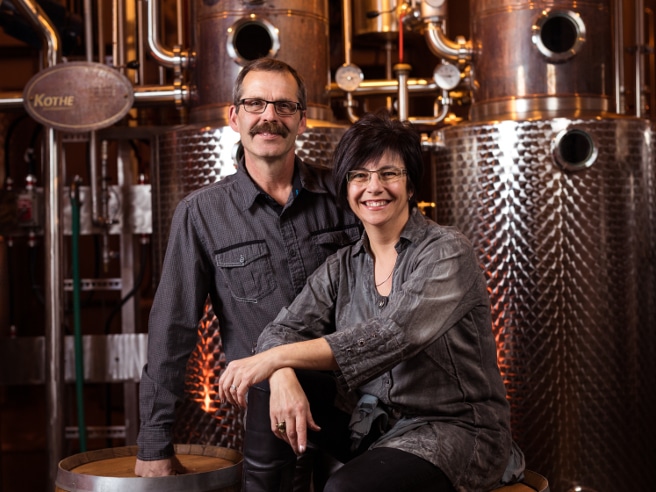 The 2019 meeting of the Prairie Grain Development Committee saw breeders focus not just on how they do their work, but why — and what the implications are for the future.

For Jamie Larsen,  an exciting part of this year’s meeting of the Prairie Recommending Committee for Wheat, Rye and Triticale (PRCWRT) was a new assessment tool created in large part by Robert Graf.

It allowed breeders who planned to put new lines forward for recommendation to run those lines through the tool, which told them whether or not the line was likely to be recommended for registration or would need to be discussed in more detail by the committee.

“When Rob came up with the idea, it was a points-based system to weigh certain traits, but evolved to the point where if a line was equal to or better than the checks it would go through, and if it was worse than the checks in some way, it would be flagged and then the breeder would have to explain why it has merit,” committee chair Larsen said.

“It offers the breeder a chance to put forth a good argument to explain why the variety has merit to be registered.”

The tool has resulted in new efficiencies for the PRCWRT, he added. “The meetings used to be hours, and this has cut that down so we can focus on other topics of discussion.”

Focusing on the big picture was a big component of this year’s Prairie Grain Development Committee (PGDC) meeting held in Saskatoon, Sask. during the last week of February. “Beyond Breeding” was the chosen theme of this year’s plenary session, which PGDC chairperson Mitchell Japp said was picked in order to highlight the long road faced by lines put forth for registration at the annual gathering.

What’s Up in Wheat

The PRCWRT looked at a record number of lines this year — 37 to be exact, according to Larsen.

W569 winter wheat (CWRW) from Graf’s program was supported for registration on Feb. 28. It met or exceeded all agronomic, disease and quality parameters for the class, Graf noted.

Some exciting new lines from Richard Cuthbert’s program were also included, among others.

That, combined with the new assessment tool developed by Graf, are just a taste of what’s to come in the world of wheat, Larsen noted.

“Hybrid wheat is coming, and that will have interesting implications from a registration perspective. Also, there’s the topic of forage wheat and how we handle that. Whether we ask for it to be put it through the special purpose class or have a special forage test is up for discussion,” he said.

“The past few years have been dry on the Prairies, so having more annual forages available would be handy for the livestock industry. The thing us, wheat is wheat — there’s no forage wheat or wheat for grain. If you want wheat for forage it needs to go through all the qualifications for grain production. Do we ask for things to change or have that forage data generated afterwards so producers have that info?”

Six barley lines were put forth for recommendation this year by the Prairie Recommending Committee for Oats and Barley (PRCOB), coming from the programs of Patricia Juskiw, Joseph Nyachiro and Yadeta Kabeta (Field Crop Development Centre in Lacombe) as well as Aaron Beattie (CDC, University of Saskatchewan).

Committee member Ana Badea is already looking forward to next year. Although she didn’t have any lines up for recommendation in 2019, the barley breeder from AAFC Brandon in Manitoba says she’s hopeful that next year could see the unveiling of a line called TR17255, a hull-less variety that could be ideally suited to the craft beer industry and a potential replacement for AC Metcalfe.

“The continuous challenge we have is to try to see into the future. We don’t have a crystal ball — it’s a challenge trying to predict what will be needed in 10 years by farmers and seed companies, malt houses, breweries. The key is making sure we develop the right germplasm needed to be the foundation of those new varieties needed by different users,” she says.

In Pulses, Protein’s the Name of the Game

With the release of the new Canada Food Guide in January, plant-based protein is a major topic among the public, and pulse breeders are aware of it.

“In pulses, we really have to hold the line on protein — it’s a value-added component of pulses,” said Glen Hawkins, breeder for DL Seeds and chair of the PRCPSC.

All seven pea lines were from the breeding program of Tom Warkentin at the University of Saskatchewan.

“One expanding area would be for selecting higher protein content in yellow pea, especially since there’s a growing market for fractionation,” Warkentin says. “We want to combine higher protein without losing good agronomic performance. We don’t want high protein and low yield.”

For Warkentin and Hawkins, the topic of value creation is top-of-mind in order to reward breeders for their innovations and help fund the creation of new varieties for producers and processors.

“At DL Seeds we’ve been working for the past 10 years in the pulse market with little to no return in terms of royalties. Developing these lines isn’t free,” Hawkins says. “In all crops where producers use farm saved seed, it’s imperative we put dollars back into the pockets of the breeders.”

“I hope we have mechanisms in place soon for self-pollinated crops so there are better incentives for breeding them,” he said.

No lines were put forward this year by the Prairie Recommending Committee for Oilseeds.

The theme of this year’s PGDC plenary session was Beyond Breeding. Here are some snapshots of the discussion.

Oat Whisky is a Thing

Wheat whisky, triticale whisky and malt barley whisky. They’ve all been made by Saskatchewan’s Black Fox Farm & Distillery. But the award-winning spirits maker has also tried its hand at making an oat whisky.

“Want a nice spirit? Use oats. Problem is, oats don’t yield a large alcohol amount,” says distillery co-owner Barb Stefanyshyn-Cote. She says that while working with oats produces a terrific whisky, the inherent qualities of the grain make it a challenge to work with.

Agronomics aside, if there’s something she would like breeders to deliver in oats, it’s taste. “I want different flavours, something that sets me apart from everyone else. That’s what will help us make breeders more money.”

She says grain varieties with unique flavour components would be highly prized by distillers like herself.

“We can charge consumers more for unique flavour. Right now, everyone is excited about heritage varieties. We know heritage varieties aren’t really grown anymore because they’re not disease resistant and don’t store well. But one thing they have is flavour. The end consumer is who [the product is] going to, and if we can’t differentiate ourselves that way, then we have a problem.”

Barley Sector too Slow to Change

AC Metcalfe barley was registered in the late 1990s, CDC Copeland as well. 75 per cent of barley acres in Western Canada are still seeded to Metcalfe and Copeland, noted Jill McDonald, executive director of the SaskBarley Development Commission.

“That’s very concerning from my board’s perspective when it comes to variety acceptance. AC Synergy is picking up some acreage, but our market is still dominated by two older varieties. That must change.”

So, SaskBarley looked at why the sector has a variety acceptance problem. The key, she says, is to engage all levels of industry to be involved in advancing new varieties.

Jason Reinheimer, senior breeder for Limagrain Cereals Research Canada, spoke about Australia’s Variety Registration Trials (NVT) system. Reinheimer grew up in Australia and spoke about some of the advantages of this system.

The NVT model is run by Australia’s Grains Research and Development Corporation (GRDC). NVT is a national program of comparative crop variety testing with standardized trial management, data generation, collection and dissemination. This is managed through an internet-accessed database that ensures a common approach and uniformity across the system.

Breeding in Australia is essentially the same as in Canada, Reinheimer noted. The major difference is Australia has no registration system for varieties. The breeder gets through their testing and makes a determination whether a line has merit for the marketplace or not. Once internal testing is complete, a line is entered into the NVT system and that results in a minimum of two years of testing before it is released to the market.

“This system ensures farmers have power. They have independent data and they make the choice,” Reinheimer said. “Instead of regulating things that come through the system, it is left open and farmers have the best information to make decisions on their farms.”