Assure Seeds near Acme, Alta., was certified in 2017. All the hard work has been worth it, says president and CEO Paul Wiebe. The certification process has made his operation much more professional and a lot safer in terms of many aspects, from handling of chemicals, donning the right personal protective equipment and containing any extraneous treatment or potential spills, he says. Photo: Paul Wiebe

An update on third-party certification as the deadline for full industry participation approaches.

With about a year to go for all commercial seed treatment facilities in Canada to engage in the Accredited Seed Treatment Operation Standards Program, it’s a good time to look both back and forward.

As everyone in the seed treatment industry from coast to coast is likely aware, development of the standards for facility certification commenced in 2010, with initial standards launched in 2014. Having these standards in place means everyone industry-wide is employing the same (and improved) stewardship practices in the storage and use of seed treatment products.

By the end of 2017, the first phase of the program had been implemented. At that point, CropLife Canada members began requiring all commercial operations treating corn, soybean and canola seed were successfully addressing all the standards through completion of a third-party audit. By the end of 2020, all remaining commercial seed treatment facilities (treating cereal and pulse seed) will be required to also have completed audits. Growers treating seed on-farm for their own farm will continue to be exempt from the process.

The need for new and uniform standards was multifaceted, explains Russel Hurst, CropLife Canada’s vice-president of sustainability and stewardship. “Around 2010, the complexity around seed treatments started to increase in terms of how products were used, the combining of fungicides and insecticides for example,” Hurst notes.

“In addition, standards were needed because while there were world-leading regulations and stewardship in place for use of crop protection products in Canada, there weren’t any industry stewardship practices in place for seed treatment products at that time. The process was starting to happen in the U.S. and Europe, so altogether, it was definitely the right time to create a health and safety and stewardship framework around seed treatment here.”

The standards development process, explains Hurst, was a careful and deliberate process that ended up lasting four years. He says the development team worked diligently with all stakeholders to address the differences between crop types, different areas of the country and other factors. “We wanted to move at a pace where everyone was comfortable and on board, addressing all concerns and testing the program thoroughly,” he says. “It was important that the standards be a positive experience and make every treatment operation better.”

Certification for some operations doesn’t result in much improvement, but others have to do a little more to finish their audits. “In general, every operation is improved and the feedback we’ve gotten from those who have finished the process is that it’s been positive and that it’s resulted in a greater situational awareness of health and safety issues and what to do in case of an emergency,” says Hurst. “For example, the program allows for a fire to be addressed appropriately and efficiently by the treatment facility staff, and also outside entities. Before certification came into play, in some municipalities local regulations required that seed treatment facilities had to file a list (with volumes) of chemicals stored on site with the local fire department. Now, as part of their audit, every facility across the country needs to do this.”

Reflections from the Front Line

Dennis Benci, owner of Benci Seed Farms in Carmangay, Alta., was a part of the standards development process for about a year and a half. He praises the collaborative nature of developing the standards, and recognizes in particular the hard work of Hurst as chair, addressing all the various needs and agendas involved. 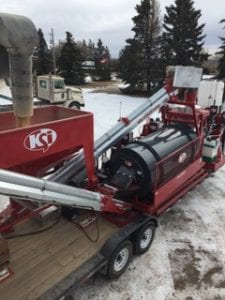 Dennis Benci, owner of Benci Seed Farms in Carmangay, Alta., was a part of the standards development process for about a year and a half and has also gone through the certification process. Photo: Dennis Benci

Overall, however, while he found the process positive, it was also a bit frustrating. “Seed growers didn’t get what they wanted with some issues,” he says. “We wanted the chemical companies to standardize in terms of having common connectors, which could greatly help in preventing spills, and we didn’t get that as part of the process and we still don’t have that. We also thought that seed treatment makers should standardize containers to all have double walls for better safety during transportation.”

Assure Seeds near Acme, Alta., was certified in 2017. “It was a bit of a learning curve,” says president and CEO Paul Wiebe. “There are a lot of requirements and it took some time to address them all. We had a pre-audit discussion and we were given a checklist with what to address. The templates were very helpful.”

But all the hard work has been worth it. The certification process, says Wiebe, has made his operation much more professional and a lot safer, from handling of chemicals, donning the right personal protective equipment and containing any extraneous treatment or potential spills.

Niemela’s Sandy Hill Seed Farm in Sylvan Lake, Alta., has also been through the audit process — its second in recent years. “We had already been through the Agrichemical Warehousing Standards audit, and there was quite a bit of duplication for the seed treatment audit,” says spokesperson Tracy Niemela, who is also vice-president of Alberta Seed Growers.

“But even with being through the chemical warehouse audit, the task of preparing for the seed treatment one was still quite onerous, and it can be quite costly and time-consuming to ensure your site meets or exceeds the standards. We did find the pre-audit a valuable part of the process and did not have to use many of the templates with the seed treatment audit, but for those in our shoes, it would be nice to have the two audits combined into one or just have to do one of them.”

That said, Niemela believes it’s safe to say the seed treatment standards certification process has made her facility more prepared for possible emergencies, and her business, like Assure Seeds, now has more safety measures in place for safe handling of seed treatments.

Westlock Seed Cleaning Co-op in Westlock, Alta., went through the certification process first in 2018 and again in 2019. The plant’s manager, Wayne Walker, says because the plant had undergone a major expansion in 2013 with a new chemical handling room, it was already mostly compliant with the standards in the audit.

In addition, he says “the safety of our staff working with seed treatment chemicals is critical, and working through the audit helped us with the health and safety aspect of our emergency response plans each plant must have.” Walker believes it has been frustrating, however, for some older plants in the province to pass the audit, and involved a large financial strain for them.

As of October 2019, 413 commercial seed treatment facilities in Canada were certified, 78 of which are in Alberta. Of those, about 50 per cent are seed growers, 40 per cent seed cleaning co-ops, with the remainder ag retailers. Looking ahead, while Hurst says it’s hard for him to estimate how many other commercial seed treatment facilities across Canada will become certified, he estimates that it will be between 200 and 300.

Hurst firmly believes with the detailed communications strategy his organization has implemented over recent years, no one should be unaware of the deadline to finish their audit by the end of 2020. “I’m a big believer in sharing as much information with businesses as possible, and I think we’ve communicated as clearly as possible about the finish line, allowing business leaders to allocate the needed resources and get it done in time,” he says. “We did this for facilities treating corn, canola and soybean seed in 2015 to 2017 and it went very well.”

Up until the end of March 2020, facilities can get their pre-audit done for free (and for the very few that have no issues flagged in the pre-audit, their audit is also free). Starting April 1, there is a fee for both the pre-audit fee and audit, about $500 each with the exact cost depending on how far the auditor has to travel. Audits will be required thereafter every two years.

“Remember,” says Hurst, “that we have created templates for all of the paperwork, and they are available for free on our website, ready to fill out with your site-applicable data. We wanted growers to have all the help they need and not feel like they are alone or frustrated in the process, so we’ve done 90 per cent of the work and facilities only have to do the other 10.”

One example of a template is the Emergency Response Plan, where facilities must identify the first responder to be called (this could be 911 or the phone number for your local emergency services), legal land location and so on.

“We really believe that this is an excellent and practical industry stewardship program, one that makes the seed treatment industry better tomorrow than it is today,” says Hurst. “That’s good for all of us. While Canada’s seed treatment industry makes up only about four per cent of the global marketplace, we want to make sure it is world class and this program does that.”