Nitrate Accumulation in Hailed Out Crops 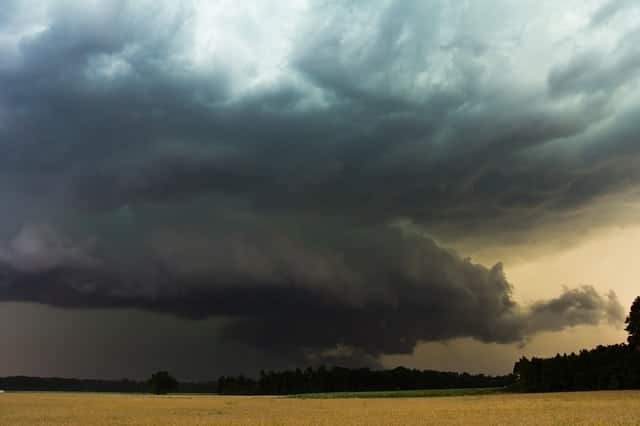 Hail storms travelling across the province this time of year are definitely not unusual. Subsequent damage to annual and perennial crops can be minimal or complete destruction depending on their severity. Barry Yaremcio, beef and forage specialist at the Alberta Ag-Info Centre, explains what to consider when salvaging damaged cereal, oilseed, or hay crops after a hail event to avoid problems with nitrate accumulation.

“Nitrate accumulation occurs in a plant when it is injured and is not able to convert nitrate to protein efficiently after a hail storm,” explains Yaremcio. “In non-legume crops, water and nutrients are pushed into the plant from the root system as quickly after the storm as was provided prior to the hail event. Nitrate accumulates in the top leaves and concentrations peak roughly four days after the injury. If the plants recover and new growth is observed, nitrate levels can return to normal 12 to 14 days after the injury.”

Soil fertility – in particular the nitrogen content in the soil – and stage of crop development are critical factors as to whether there will be a nitrate problem in the plants. “Crops such as canola and wheat have high amounts of nitrogen fertilizer applied. If the crop is thin and not overly productive, there could be significant amounts on soil nitrogen remaining in the soil into July. A crop that is thick with high yield potential would use up the available nitrogen much earlier in the growing season. With less nitrogen left in the soil, there is less available to be transported into the plant,” says Yaremcio.

Yaremcio adds that hay crops tend to have lower fertility than annual crops. “The risk of a hay stand having high nitrate concerns is much lower. Alfalfa and legume crops have nodules in the root system that regulates nitrate transport into the plants. The nodules only allow as much nitrogen into the plant as is needed, therefore it is extremely rare to have nitrate accumulation in legume forages. Nodules on the roots of legume crops only allow as much nitrogen up into the plant as is required. There is no risk of nitrate accumulation in alfalfa or clovers.”

Forage test labs can test for nitrates. Says Yaremcio, “If the sample is taken the fourth day after the storm, the results will indicate the “worst case” situation. Talk to the lab and request a rush analysis, then the results could be available one to two days after the sample is received.”

Yaremcio explains that ensiling the crop will not reduce nitrate levels if the product is put up properly. “Adequate amounts of packing, sealing with plastic as soon as possible, and allowing the silage to ferment for three to four weeks produces a stable product. Silage that is poorly made can reduce nitrate levels, but the quality of the silage is greatly diminished. To get a representative sample when the silage is being made, take one handful of silage out of each load as the trucks bring it in. Put the handful into a plastic pail with a lid. At the end of the day, mix up the sample and collect a half bread bag full, squeeze out the air and freeze the sample. Send the sample in for analysis on a Monday or Tuesday so it gets to the lab without being in transport over the weekend.”

Find more information about nitrate poisoning and feeding nitrate feeds to livestock. “Nitrate in a forage or silage can be managed so that there are no problems or difficulties encountered during the feeding program,” adds Yaremcio. “Talk to your feed sales person or company nutritionist, nutritional consultant, or contact the Ag-Info Centre talk to a livestock specialist.”